The Political Crisis in Georgia: Stakes and Consequences

The protracted political crisis in Georgia, a state characterised by high degrees of polarisation, endangers Georgian democracy and, by extension, Georgian and European security. The crisis is also a test of the patience of Georgia’s Western partners – the European Union, the United States and NATO – without the support of which Georgia would be seriously exposed to Russian influence.

With the court proceedings against Mikheil Saakashvili, which began on 29 November 2021, the political crisis in Georgia turned a new page. The former president of Georgia (2004–2007 and 2008–13) is accused, among other things, of exceeding official authority during a brutal crackdown on protesters in 2007. Saakashvili, who is also the founder and honorary Chair of the main opposition party, United National Movement (UNM), has been living in exile for the past eight years, mostly in Ukraine, where he currently has citizenship. He returned to Georgia on the eve of the local elections there on 1 October 2021 and was immediately detained by the Georgian authorities, which added illegal border crossing to the existing charges. He had already been convicted in absentia on two charges and sentenced to six years in prison.

In the days following his arrest, thousands of supporters demonstrated to demand his release. The situation became even more acute when Saakashvili went on hunger strike for 50 days, before he was transferred to a military hospital in November. Nine UNM parliamentarians also went on hunger strike in support of their party leader. The protests continued as the court proceedings proceeded, and several hundred opposition supporters gathered in front of the Tbilisi court building where Saakashvili was being tried. The police used tear gas and detained 15 protesters. On 8 December, protesters held a rally in front of the residence of Georgia’s President, Salome Zourabichvili, demanding the head of state pardon her predecessor, something which she has repeatedly refused to do. In her New Year address on 16 December, however, the President set a more conciliatory tone that stressed the need for political depolarisation.[1]

Several prominent Georgian politicians with former connections to the ruling Georgian Dream party, have criticised the treatment of Saakashvili. On 8 October, Saakashvili’s successor, former president Giorgi Margvelashvili, said that his predecessor had been “imprisoned on political grounds under circumstances of the current government”, which he said was “authoritarian” and “no longer has the moral right” to try Saakashvili. In addition, former prime minister Giorgi Kvirikashvili strongly criticised the authorities over Saakashvili’s treatment and the distribution of prison hospital video footage of Saakashvili. From abroad, many prominent international politicians, including former leaders of Latvia, Ukraine and Sweden, as well as current Members of the European Parliament, criticised the Georgian authorities and called for Saakashvili’s release. [2]

There has been an escalating political crisis in Georgia since parliamentary elections in the autumn of 2020. The opposition boycotted the new parliament, accusing Georgian Dream of rigging the elections and trying to establish one-party rule. The situation deteriorated further after 23 February 2021, when special forces and the police stormed UNM headquarters and arrested the party’s Chair, Nika Melia. Melia was arrested for his involvement in the violent protests of June 2019 against a decision to allow a Russian State Duma deputy to give a speech from the Speaker’s chair in the Georgian Parliament. Georgian Dream Prime Minister Giorgi Gakharia resigned in protest against the arrest of Melia and went into opposition.

In April 2021, following six months of negotiations led by the European Union and the United States, the parties reached an agreement on the protracted dispute. By July, however, Georgian Dream had withdrawn from the agreement, accusing the opposition of failing to fulfil its obligations.

The local elections in October 2021 took place at a time of growing friction with the EU and the United States, as well as within Georgia. The ruling party blamed the opposition for escalating the destabilisation. The Georgian Dream party won the mayoral elections in 19 of Georgia’s 20 largest cities, including the capital, Tbilisi, where it won the first round on 2 October with 46.7 per cent of the votes. The opposition, mainly the UNM, claimed that the elections had been “stolen” and “totally rigged”. The international observation mission stated after the first round that the elections had been generally well-administered but held against the backdrop of a protracted political crisis and characterised by hardened polarisation.[3]

Old and new features of the conflict

Georgian Dream and the UNM have been locked in a viscous power struggle since the parliamentary elections in 2012. Even before that the political culture in Georgia was characterised by polarisation, linked to lack of compromise, a winner-takes-all approach and a highly personalised political system that lacks strong institutions. Each time a new ruling party comes to power, it overturns most of the decisions made by its predecessor. Furthermore, post-Soviet Georgia has developed a trend for the ruling party to aspire to single-party rule. During Eduard Shevardnadze’s presidency (1995–2003) it was the Union of Citizens of Georgia, under Saakashvili the UNM and under Bidzina Ivanishvili – the “strong man” behind the current government – it is the Georgian Dream party.

After the 2020 parliamentary elections, this polarisation reached new heights and to some extent inspired new actors on the far-right. One such new actor is the Conservative Movement, which was registered as a new party at the national Agency of Public Registry on 7 December 2021. The Conservative Movement is the political party of the right wing media outlet Alt-Info, the founders of which organised and participated in a counter-demonstration to the Pride march on 5 July 2021 in which more than 50 journalists were injured in an attack by far-right groups. One Georgian cameraman died from the injuries he sustained while covering the demonstration against the planned march in Tbilisi.

Alt-Info/Conservative Movement holds openly anti-liberal, anti-LGBT+ and anti-Muslim positions. It also holds pro-Russian views and is seeking to re-establish a Russian military base on Georgian soil, in addition to the ones Russia maintains on occupied Georgian territory in Abkhazia and the Tskhinvali region/South Ossetia. It has also openly cooperated with the Russian philosopher and ultra-nationalist, Aleksandr Dugin. Another pro-Russian group, Alliance of Patriots of Georgia, which has four seats in the 150-seat Georgian Parliament, approached the Russian government after the 5 July events to ask for help with dealing with the political crisis in Georgia. Although still small in electoral terms, these Georgian far-right and nationalist groups play on religious and traditionalist sentiments, appeal to certain conservative constituencies and can be used by Russia to advance its interests and influence in the country.

The escalating animosity since the 2020 parliamentary elections has also led to the radicalisation of the mainstream parties and provided “justification” for the targeting of minority groups, journalists, civil society activists and the EU, all of which have been represented as “evil”. LGBT+ groups have been the most vulnerable and depicting political opponents as “gay” has been a successful way to stigmatise them. The government was passive in response to the violence from far-right political activists on 5 July 2021, and Prime Minister Irakli Gharibashvili later framed the Pride march, which had already been cancelled, as an attempt by the radical opposition and Saakashvili, its leader, to destabilise the country.[4]

The Georgian Orthodox Church, which is an institution that enjoys high status in Georgia, is a source of political and societal polarisation with regard to LGBT+ rights, religious sentiment, so-called traditional values and various other issues that are often depicted by church representatives as threats to Christian values and traditions.[5]

What are the consequences?

For Georgia itself, the intensification of the political crisis and the increasingly illiberal agenda of the ruling Georgian Dream party could further fracture Georgian politics and society. A perceived repudiation of commitments on democracy, human rights and the rule of law could have consequences not only for the country, in the form of poor governance and declining human security for its citizens, but also for EU cooperation in the form of the Association Agreement and alignment with EU values, norms and standards, something that would threaten EU-approximation and be bad for the Eastern Partnership and the EU as a whole.

Furthermore, it could also open up the possibility of increased influence by Russia, pro-Russian interest groups and far-right entities. Chaos and civil strife are considered fertile ground for Russian interference in its neighbourhood, especially if Russia perceives the West’s interest in the region to be declining.

At the geopolitical level, these developments could lead Georgia’s Western partners to lose patience. That said, Georgia continues to be the only true pro-European country in the South Caucasus with an Association Agreement with the EU, and is a member of the Association Trio with Ukraine and Moldova, as well as an aspiring NATO member. On 12 December 2021, US Secretary of State Anthony Blinken reaffirmed that the NATO door remains open to Georgia and Ukraine, referring to the 2008 NATO Bucharest Summit decision that the two countries will eventually become members of the organisation. Russia has recently repeated its demand that the United States and other NATO members issue “long-term guarantees” that there will not be any further enlargement of NATO.

The crisis could also have implications for the changing geopolitical landscape in the South Caucasus and the wider Black Sea region. Russia has strengthened its influence in the South Caucasus following the Second Karabakh War between Armenia and Azerbaijan in the autumn of 2020. Moscow alone brokered the ceasefire agreement between the belligerents, which allowed it to deploy military peacekeepers in the conflict zone for the first time. At the same time, Turkey’s influence in the region has also been strengthened by the war. A potential decline in Western interest in the region could further weaken Georgia’s position in the ongoing reset of trade links and economic cooperation since the war. Georgia did not attend the inaugural meeting of the so-called 3+3 regional cooperation format (the three Caucasian states, Georgia, Armenia and Azerbaijan, and the three “big neighbours”, Russia, Turkey and Iran) pushed by Russia and Turkey, which was held in Moscow on 11 December 2021.

Finally, the legal process against Saakashvili, a Ukrainian citizen, could further damage Georgia’s relations with Ukraine – a key ally in the Association Trio – which have suffered since the former Georgian president became engaged in Ukrainian politics in 2015. Ukraine’s President Volodymyr Zelensky has expressed concern over the treatment of Saakashvili and stated in October that he would work to bring him back to Ukraine. 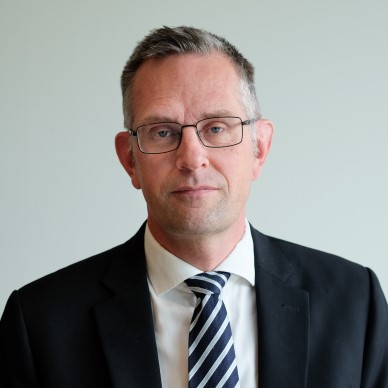 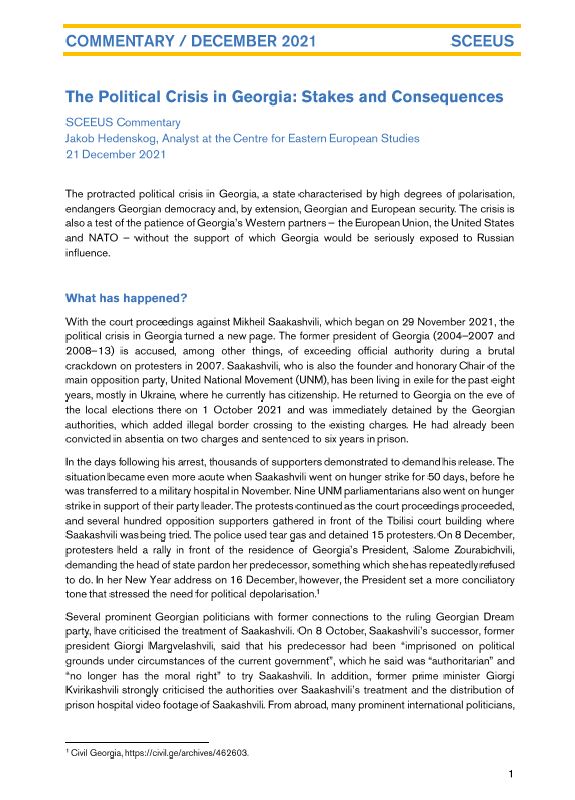