The June 2021 US-Russian Summit: An Analysis

On 16 June 2021, US President Joe Biden met with Russian President Vladimir Putin in Geneva, Switzerland, for their first face-to-face discussion since the Biden Administration took office in January. The meeting came at the end of a week of intense US summit diplomacy in the UK and Brussels. The results were notable as regards strategic stability, including a re-formulation of the famous Reagan-Gorbachev 1985 Geneva statement on the principle that nuclear war is unwinnable, and therefore must never be fought.

Other outcomes included the return of the bilateral Ambassadors promised in upcoming days, and agreement for experts to prepare specific topics for further rounds of US-Russian talks, including an “integrated bilateral Strategic Stability Dialogue…to lay the groundwork for future arms control and risk reduction measures,” and further dialogue on cybersecurity. The list of disagreements was long, including on Ukraine, Syria, Belarus, sanctions, human rights, the treatment of Alexei Navalny, and the need to prevent Russian cyberattacks on the US. In the closing press conference, Putin lauded Biden as an experienced statesman and said the summit had been constructive but bristled at questions on human rights. Biden sarcastically “sympathized” with Russia being squeezed by China, emphasizing the need for continued US global leadership in the face of change. From a Russian point of view, the summit can be seen as success, owing to the overall tone where the sides mostly seemed to agreed-to-disagree, with Biden reconfirming Russia as an equal. Certainly, this could be interpreted by Moscow as a first step towards normalization, despite Russia’s continued antagonistic behavior.

The Summit was successful, but shorter than anticipated, ending after three and a half hours, rather than the five or more. The meeting began with a press introduction by Swiss President Guy Parmelin. The two Presidents then met in a small group format for 1.5 hours, with the Presidents accompanied by one notetaker each – Foreign Minister Sergei Lavrov for Russia and Secretary of State Anthony Blinken for the US. Upon meeting, Putin is reported to have said, “Mr. President, I’d like to thank you for your initiative to meet today,” as he knew the US president “had a long trip and lots of work.” But the Russian president emphasized that there are “lots of questions accumulated in Russia-US relations that require discussion on the highest level.” Biden said the two leaders would try to determine areas of cooperation and mutual interest. “It is always better to meet face to face.”

The full Summit agenda was thought to include international norms, strategic stability, arms control, human rights (including the treatment of Alexei Navalny), cybersecurity (including election interference), Ukraine, restoring diplomatic relations, Belarus, climate change, the Arctic, COVID-19, the Middle East (including Iran), Libya, Syria, Afghanistan, North Korea, and the status of prisoners on each side (including a potential exchange).

After a break, the two sides re-convened with a larger group of experts and a broader agenda. The second session lasted only an hour – despite initial plans for it to be conducted in two parts for much longer. The two sides agreed to a statement, which included a statement echoing the Gorbachev-Regan statement at the Geneva Summit in November 1985, stating that “today we reaffirm our commitment to the principle that there can be no winners in a nuclear war and should never be unleashed.” It continued, “consistent with these goals, the United States and Russia will embark together on an integrated bilateral Strategic Stability Dialogue in the near future that will be deliberate and robust. Through this Dialogue, we seek to lay the groundwork for future arms control and risk reduction measures.” Biden also was reported to have given Putin a list of 16 critical infrastructure entities that should be off limits for attacks, whether cyber or otherwise, but the list has not been circulated as of this writing.

In the final press conference, the two sides were largely complimentary to each other, with Putin contrasting Biden’s professionalism against Trump. The two sides praised the results of the meeting and looked to the future. Biden pushed back angrily against an oddly-phrased question on why the US had not already changed Russia’s behavior for the better, but apologized on the flight home. In Biden’s final press engagement before departing, he put some psychological pressure on Putin, saying that “Russia is in a very, very difficult spot right now…[and] are being squeezed by China. They want desperately to remain a major power.” He also made the case for continued US leadership in global affairs.

Prior to the meeting, the main US objective was to “restore predictability and stability to the U.S.-Russia relationship” (White House Press Secretary Jen Psaki, Press Conference, 14 June 2021).  With this as the topline objective, one can assess the meeting as a success, assuming that Russia wants to become more predictable. Over the last years Russia seems rather to have regarded unpredictability as a strategic asset. The main question, however, should be whether Russia can be expected to restore its respect for international law and the underlying principles and commitments of the European security order (as contained in the Helsinki Final Act and the Paris Charter) and how the US will hold Russia accountable for its violations. On this matter the summit produced little result. The meeting came in the context of a whirlwind of diplomacy for the new US President, including a week that saw him attend a US-UK Summit, a G7 Heads of State and Government Meeting in Cornwall, UK, a NATO Mini-Summit, and a US-EU Summit. It is notable that there were no discernable allied disagreements on Russia in any of these meetings, with continued strong language in the NATO Communiqué, but a slight divergence on policy towards China visible in the G7 Communiqué. The meeting also comes a month after a meeting between Biden and President Moon Jae-in in Washington to fortify the alliance commitment between the US and South Korea.

In contrast to the Trump-Putin meeting in Helsinki in 2018, the two Presidents briefed the press separately on the results of the meeting afterwards. Biden and Putin did not trade barbs and recriminations, but Putin clearly took exception to mention of human rights and the treatment of Navalny during his press conference. Biden’s decision to “speak plainly” with and about Putin seemed to have paid dividends, with Putin contrasting Biden as a professional in comparison to Trump. It appeared that Trump’s approach of mixed messages of personal flattery and policy divergence was less valued by Putin. However, Biden did give Putin a pair of sunglasses that matched his own, and, for some reason, a crystal bison.

Specific results included the return of the bilateral Ambassadors (Anatoly Antonov and John Sullivan) after several months of “consultations” in capital (Antonov recalled on 17 March, Sullivan recalled on 20 April). The agreed statement is especially significant in the current environment. Many nations and observers had hoped Trump and Putin would repeat the Reagan-Gorbachev 21 November 1985 statement on nuclear war in 2018, but the Trump Administration rejected any such effort. The original Reagan-Gorbachev statement reads:

The sides, having discussed key security issues, and conscious of the special responsibility of the USSR and the U.S. for maintaining peace, have agreed that a nuclear war cannot be won and must never be fought. Recognizing that any conflict between the USSR and the U.S. could have catastrophic consequences, they emphasized the importance of preventing any war between them, whether nuclear or conventional. They will not seek to achieve military superiority.

Biden and Trump were able to agree to an echo of this statement, with different contexts and scope, but nevertheless significant due to the absence of any such agreement under Trump. The 16 June 2021 statement reads:

Today, we reaffirm the principle that a nuclear war cannot be won and must never be fought. Consistent with these goals, the United States and Russia will embark together on an integrated bilateral Strategic Stability Dialogue in the near future that will be deliberate and robust. Through this Dialogue, we seek to lay the groundwork for future arms control and risk reduction measures.

It is worth noting that the 1985 statement came during a diminution of tensions, and real hope that Gorbachev, unlike his predecessors, would seek peaceful relations with the West. There is no similar belief in the West that Putin has decided to reduce tensions more broadly as a change in Russian foreign policy. However, it is a valuable statement in the context of the Nuclear Non-Proliferation Treaty (NPT) and arms control community. It also signals the continuity of US-Russian dialogue under the broad context of strategic stability.

US-Russian Strategic Stability talks were initiated by President Barak Obama in 2012 with State Department Under Secretary of State Ellen Tauscher in the lead on topics including missile defense, nuclear weapons, arms control, risk reduction, and European security. Under Secretary Rose Gottemoeller continued these talks after the untimely death of Tauscher. President Trump decided to continue these talks, but renamed them as “Strategic Security” talks, and conducted two rounds in October 2017 and September 2020. The Putin-Biden statement restores their original name and refocuses them on “future arms control and risk reduction.” Arms control expectations will now rise as observers await the location, timing, staffing, and topics of the Strategic Stability talks.

US Ambassador to Russia John Sullivan

Russian Ambassador to US Anatoly Antonov

The Biden-Putin Summit provided no breakthroughs but is significant, at least from a strategic stability perspective. The management of expectations by the US was an important, hard-learned lesson from the past. Biden’s “straight-talking” approach advanced US interests and avoided the appearance of the summit as a “reward” for Putin. Despite a continued divergence of interests, the agreed statement on nuclear war and commitment to continued Strategic Stability talks is positive. Throughout Biden’s month of intensive diplomacy, he has made clear that he will continue to reinforce alliance relationships after four years of disruption and decay. However, the damage to US foreign policy has been done. Even among close allies, hedging strategies are apparent and likely will continue, and Russia and China will press their natural advantages. New arms control agreements are not likely in the short term – but Strategic Stability dialogue can provide the necessary platform for progress on US-Russian arms control.

The US and Russia should announce the format, dates, scale, and scope of the next round of Strategic Stability talks, including location, date, participants, format and topics.

We, President of the United States of America Joseph R. Biden and President of the Russian Federation Vladimir Putin, note the United States and Russia have demonstrated that, even in periods of tension, they are able to make progress on our shared goals of ensuring predictability in the strategic sphere, reducing the risk of armed conflicts and the threat of nuclear war.

The recent extension of the New START Treaty exemplifies our commitment to nuclear arms control. Today, we reaffirm the principle that a nuclear war cannot be won and must never be fought.

Consistent with these goals, the United States and Russia will embark together on an integrated bilateral Strategic Stability Dialogue in the near future that will be deliberate and robust. Through this Dialogue, we seek to lay the groundwork for future arms control and risk reduction measures. 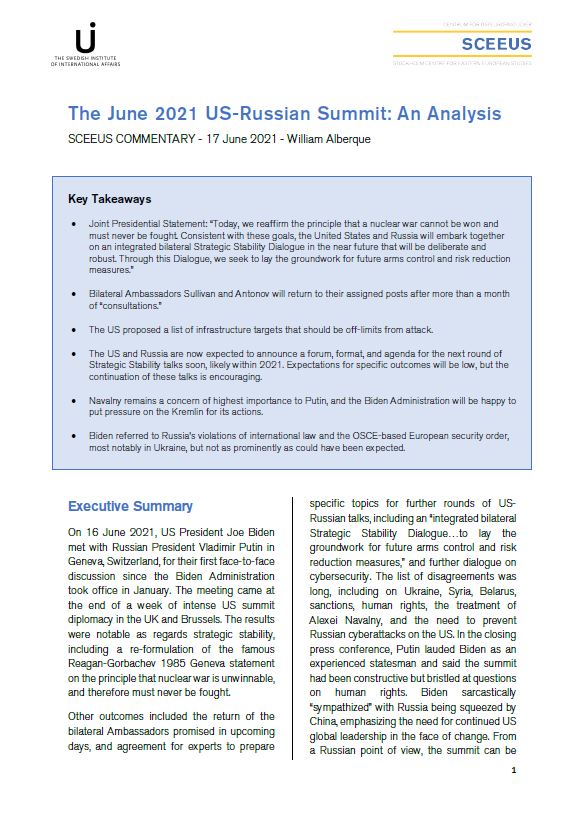 The June 2021 US-Russian Summit: An Analysis 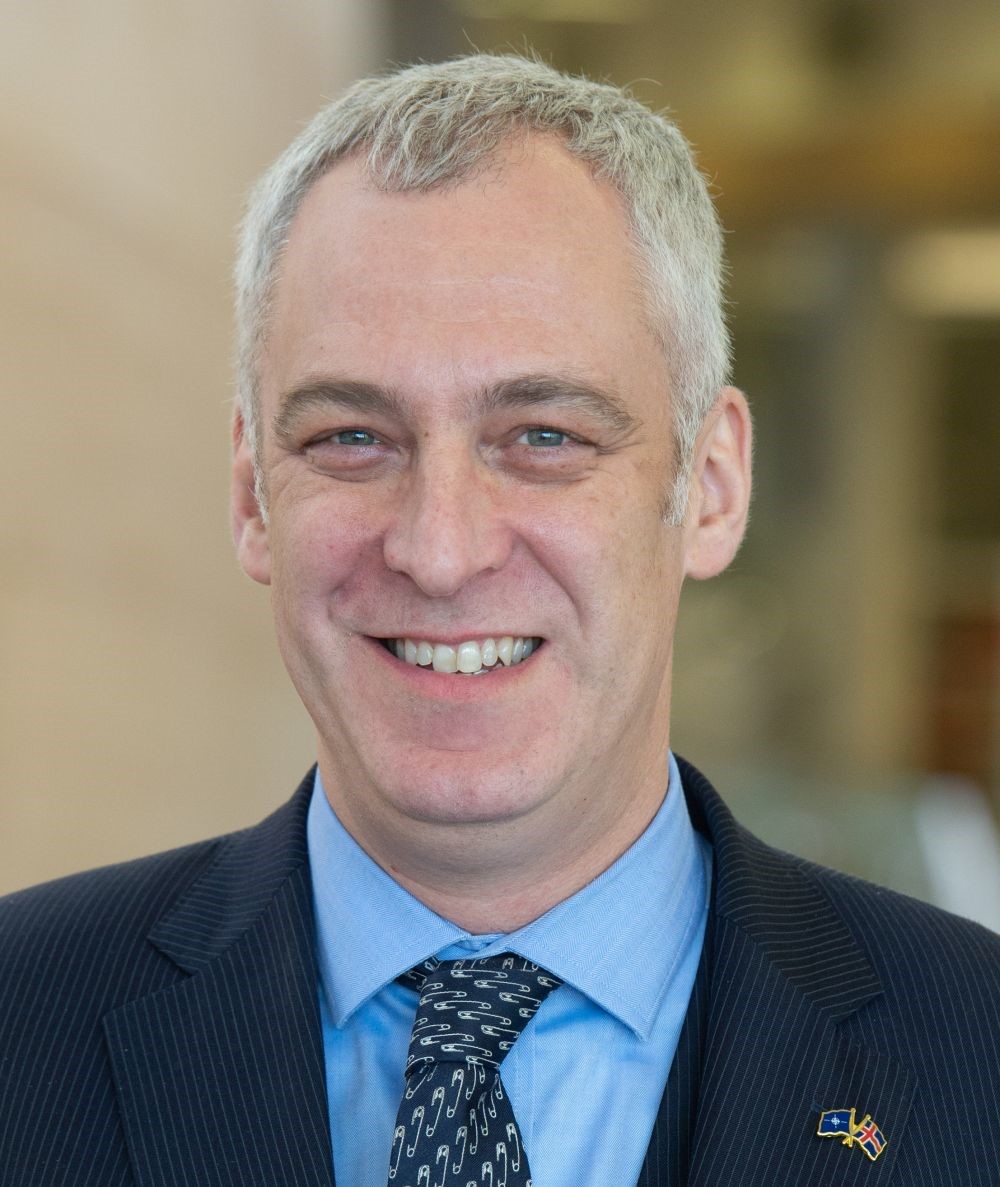