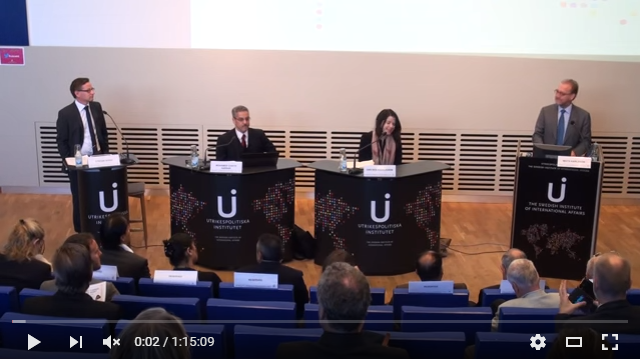 Democracy in Tunisia: Where Are We Now?

The Swedish Institute of International Affairs (UI) held a discussion taking stock of the democratic and political developments in Tunisia after the Arab Spring.

Tunisia is widely praised as the sole success story emerging out of the Arab Uprisings in 2011. Since the Revolution, democratic parliamentary and presidential elections have been held and a new constitution adopted, which has been widely hailed as one of the most democratic in the region.

However, the young democracy has also been a target for high profile Islamist terrorist attacks, most notably at the Bardo National Museum in March, and at the Sousse beachfront in June.

On September 11, 2015, the Swedish Institute of International Affairs (UI) arranged a discussion taking stock of the democratic and political developements in Tunisia after the Arab Spring.

What is the future for democracy in Tunisia? Will its government be able to balance demands for security on the one hand, and the safeguarding of the rule of law on the other? How will the on-going conflict in neighbouring Libya influence Tunisia?

The seminar was moderated by Stefan Borg, Researcher at UI and was enabled with the financial support of the Swedish International Development Cooperation Agency, SIDA.