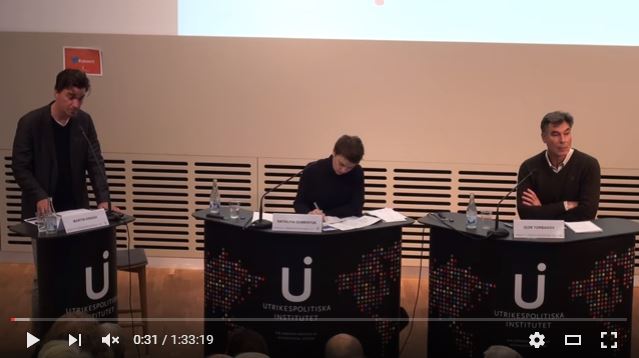 Ukraine After Maidan: Reform During Conflict

On November 9 2015, The Swedish Institute of International Affairs (UI) held a discussion on the current challenges to Ukrainian security and reform.

Ukraine is at a crossroads. The war in the eastern regions has torn the country apart, and resulted in the death of nearly 8000 people since the Russian invasion in February 2014. Although a ceasefire has largely held since September 1, there is a persistent threat of renewed heavy fighting.

At the same time, the government is grappling with a challenging reform agenda. Reformers are locked in a battle with oligarchs and bureaucrats seeking to maintain the corrupt system. At stake is the future orientation of Ukrainian society and politics.

On November 9, 2015 the Swedish Institute of International Affairs (UI) arranged a discussion on the current challenges to Ukrainian security and reform.

What is the status of Ukraine’s war with Russia in the Donbass region? Is the Ukrainian government delivering on promised political and economic reforms? Is the West doing enough to help?

Speakers:
Nataliya Gumenyuk, Ukrainian journalist and commentator specializing in foreign affairs. She is co-founder and currently head of Hromadske.TV and Hromadske International.
Igor Torbakov,Senior Fellow at the Center for Russian and Eurasian Studies, Uppsala University, and Center for Baltic and East European Studies, Södertörn University.

The seminar was moderated by Martin Kragh, Researcher and Program Manager of UI’s Russia Programme.