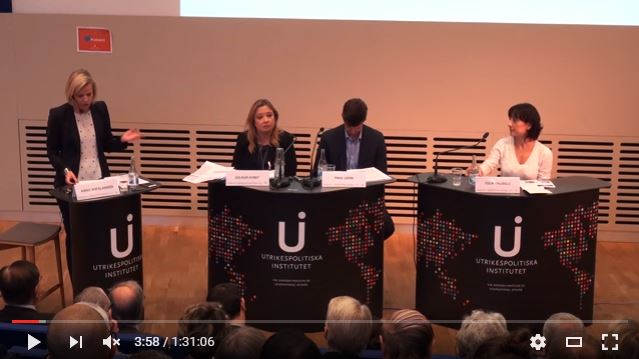 Turkey in Turmoil: What Next?

Turkey’s Parliamentary election in June was followed by an eventful few months. The ruling AK Party lost its majority and the pro-Kurdish HD Party reached over the Parliamentary limit for the first time. On November 18, 2015 the Swedish Institute of International Affairs arranged a discussion on the rapid political developments in Turkey with domestic and international consequences.

Terror attacks ascribed to ISIS killed hundreds in Suruc and Ankara, and the truce between PKK and Turkish military was ended with violence from both sides. Turkey agreed to the use of its Incirlik military base by the US and thus further aligned itself with the NATO coalition. After coalition talks stalled, AKP regained majority in the November 1st re-election.

What can we expect from Erdogan, the PKK, ISIS and other key actors? Does Turkey still have a role as a democratic influence in the region? What does the current situation mean for Turkish relations with Europe?

Participants:
Gülnur Aybet is Professor and Head of Department of Political Science and International Relations at Bahçeşehir University, Istanbul.
Tülin Daloglu is a journalist who has written extensively for various Turkish and American publications. Daloglu ran for parliament as a member of the New Turkey Party in 2002.
Paul Levin is Director of the Stockholm University Institute for Turkish Studies (SUITS). Levin replaces Sinan Ülgen who has had to cancel his participation.

The seminar was moderated by Anna Wieslander, Deputy Director of the Swedish Institute of International Affairs.