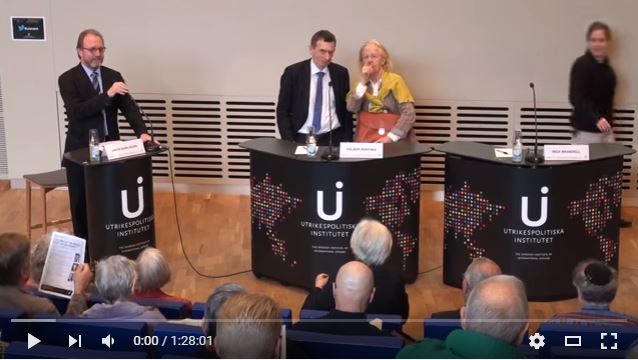 The End of the Middle East as We Know it

On May 25, 2015, the Swedish Institute of International Affairs (UI) organized a discussion on the political trends in the Middle East, and changing foundations of the regional order.

The Middle East has been characterized by political stability and authoritarian rule within its states, but the region is also hosting significant political and military conflicts. Seeming balance of power is now increasingly dissolving, and new constellations are forming.

Iraq and Syria, once key players in the region, are now the scene where regional conflicts converge. New power centers are forming, and Iran and Saudi Arabia are surfacing as the main regional antagonists. Religion and Sunni/Shia affiliation is considered increasingly important.

With Western powers’ increasing reluctance to intervene, and with new armed non-state actors like the Islamic State gaining power, national borders are challenged and transcended. Libya and Yemen are turning into ungoverned territories.

Speakers:
Volker Perthes, Director of the German Institute for International and Security Affairs (SWP) and Executive Chairman of the Board.
Inga Brandell, Senior Professor in Political Science at Södertörn University and Professor at the Department of Political Science, University of Oslo.

The seminar was moderated by Mats Karlsson, Director at UI.