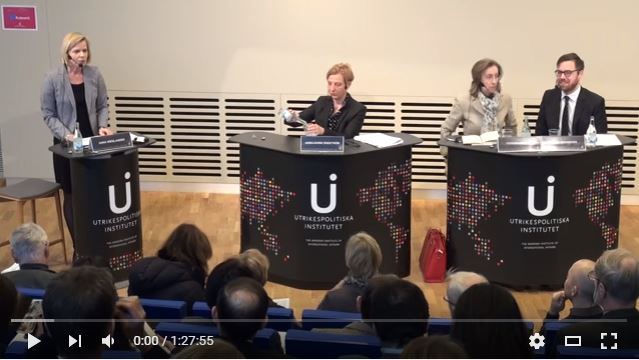 On January 22, 2015 the Swedish Institute of International Affairs (UI) organized discussion on EU’s Common Foreign and Security Policy (CFSP) and the role of the European External Action Service (EEAS), their current developments and future challenges.

The EEAS has for the past 4 years been strengthening its role as the coordination centre for the CFSP and the EU’s external relations, although the tension between national interests and supranational decision-making still remains.

As of 2014, a new High Representative of the Union for Foreign Affairs and Security Policy / Vice-President of the Commission is taking office, at the same time as several events and crises both near and afar suggest that the demand for common European responses is as high as ever.

What is the current state of institutional development in EU foreign and security policy? How will the EEAS manage to respond to the issues it is faced with? What are the most important challenges, and can these be dealt with in the prevailing setting?

Speakers:
Anna-Karin Eneström, Ambassador, Head of the Secretariat for Sweden’s candidature to the Security Council 2017-18. Previously Swedish Ambassador to the Political and Security Committee at the Council of the EU.
Federica Bicchi, Associate Professor in International Relations of Europe at the London School of Economics and Political Science.
Niklas Bremberg, Research Fellow at UI's Europe Research Programme.