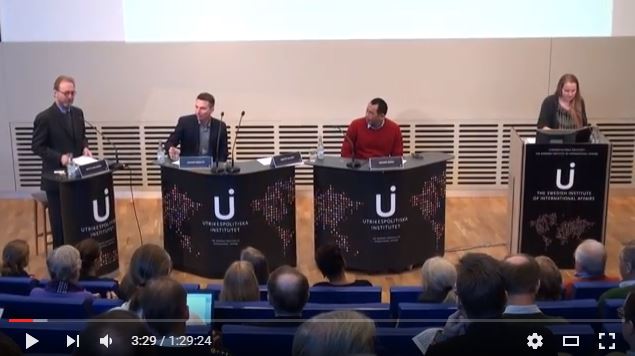 What happened to the peace and democratization process in Burma?

On February 10, 2015 the Swedish Institute of International Affairs (UI), in collaboration with the Swedish Rohingya Association, arranged a seminar on the developments in Burma (Myanmar), and the situation in the country.

Optimism was high when the military junta was replaced by a democratically elected government in 2011. The Nobel Peace Prize Laureate Aung San Suu Kyi and other political prisoners were released, and sanctions by the EU and USA were lifted as a peace process was initiated to end more than 75 years of civil war.

As the country is about to hold new elections in 2015, the picture is changing. Critical voices are being censured, the peace process has come to a halt and violence in the conflicts and against the Muslim minority Rohingya is increasing, forcing thousands to flee from their homes.

What is happening in the country, and how will the situation develop in 2015? Will the elections be held at all? Will the ethnical violence continue, and what can the rest of the world do?

The discussion was moderated by Mats Karlsson, Director at UI.