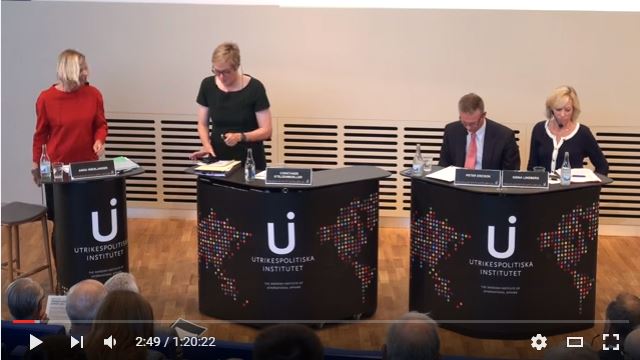 On September 11, 2014, The Swedish Institute of International Affairs (UI), the German Marshall Fund and the Swedish Ministry for Foreign Affairs arranged a seminar with discussions on the results of the Transatlantic Trends Survey 2014.

Transatlantic Trends is an annual survey measuring public opinion in the United States, Turkey, Russia, and ten European Union member states: France, Germany, Greece, Italy, the Netherlands, Poland, Portugal, Spain, Sweden, and the United Kingdom. The survey explores how Europeans and Americans view the transatlantic relationship and different challenges facing the world. Sweden takes part in the survey for the fourth time this year.
Of particular interest in this year’s report are the European and U.S. responses to the crisis in Ukraine. Other issues examined are the state of the transatlantic relationship after the NSA scandal, the future of European integration, Russian foreign policy preferences and NATO’s future, as well as topics that cross the domestic-foreign policy divide, like the state of the economy and immigration.

Read the full report at http://trends.gmfus.org/transatlantic-trends/