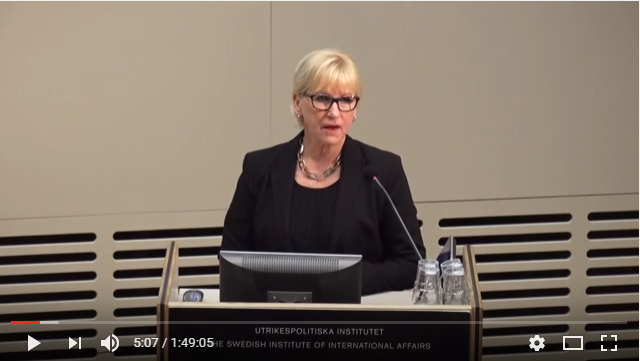 Freedom of the Press and Free Speech: Defending Our Democratic Values

On August 30, 2016 the Swedish Institute of International Affairs (UI) and The Swedish Ministry for Foreign Affairs in cooperation with the Baltic Sea festival by the Swedish Radio arranged a high-level seminar about freedom of the press and free speech in connection with the 25th anniversary of the re-establishment of diplomatic relations with the Baltic countries.

Challenges to democracy and the EU’s fundamental values in Europe today
Opening address by Margot Wallström, Minister for Foreign Affairs of Sweden

Perpectives from the Baltics: How do we defend ourselves against the threats to democracy, freedom of expression and freedom of the press in the EU?

Panel discussion: What is needed to protect freedom of the press and freedom of expression, and the fundamental democratic values in Europe?

The seminar was moderated by Ginna Lindberg, Head of Foreign News at Ekot, Swedish Radio.