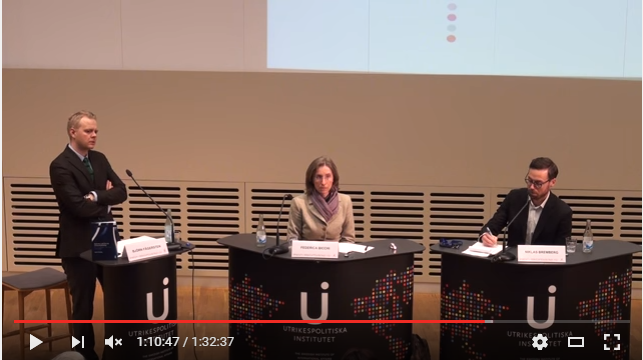 Security in the Mediterranean: What Role for the EU?

On 21 January 2016, the Swedish Institute of International Affairs (UI) organized a discussion on the current security challenges facing the Mediterranean region and the role of the EU in tackling them.

Civil war, transnational terrorism and unregulated migration have turned the Mediterranean region into a hotspot calling for increased European action both in terms of diplomacy and security-building.

The EU has sought to promote regional cooperation in the Mediterranean since the 1990s. Its "comprehensive approach” to security seems to make it particularly well-equipped to play a constructive role in dealing with the multi-faceted challenges facing states and societies in the region.

In the summer of 2015, the EU launched a naval mission to combat human smugglers and conduct sea rescue operations. What other tools and assets can the EU deploy in order to promote security in the Mediterranean region? What lessons can be drawn from past experiences? What should the EU focus on in the future?

Speakers:
Niklas Bremberg, Researcher at UI and author of the book Diplomacy and Security Community-Building: EU Crisis Management in the Western Mediterranean, Routledge, 2016.
Federica Bicchi, Associate Professor in International Relations of Europe at the London School of Economics.

The seminar was moderated by Björn Fägersten, Senior Reseach Fellow and Head of UI’s Europe Programme.