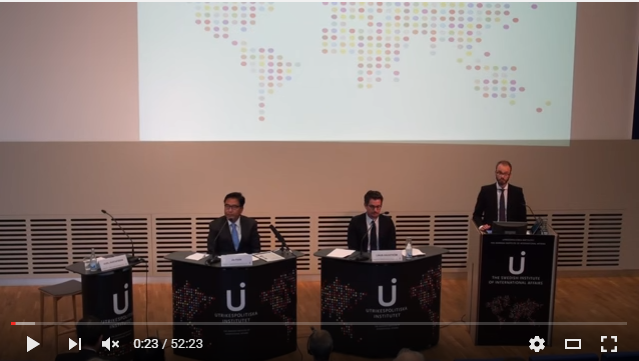 The Future of Asia and the Role of Korea

The Swedish Institute of International Affairs (UI), in collaboration with the Embassy of the Republic of Korea, held a discussion on the Asian regional prospects and challenges, with a special focus on Korea.

Asia finds itself at the centre of global attention as the fastest growing region of the world. The Obama administration has made "Pivot to Asia” its signature policy, and President Putin has launched a new "Look East” policy. Economically, the region is predicted to grow faster than any other in the world, with China in the lead.

At the same time, the region faces numerous challenges, including territorial and historical conflicts. In addition, geostrategic competition, as well as income inequality, is expected to increase.

What does the future hold for the East Asian region? What are the strategic implications of both American and Russian increased interests in the region? How does South Korea deal with this situation?

Speaker: Dr. Jin Park, Chair Professor at the Graduate School of International and Area Studies of Hankuk University of Foreign Studies, former Chairman of the Foreign Affairs, Trade, and Unification Committee of the National Assembly of the Republic of Korea, and the President of Asia Future Institute, an independent policy think-tank that conducts research on the future development of Asia and promotes Korea’s role in the region.

About the seminar: This discussion was organized by The Swedish Institute of International Affairs (UI), in collaboration with the Embassy of the Republic of Korea.