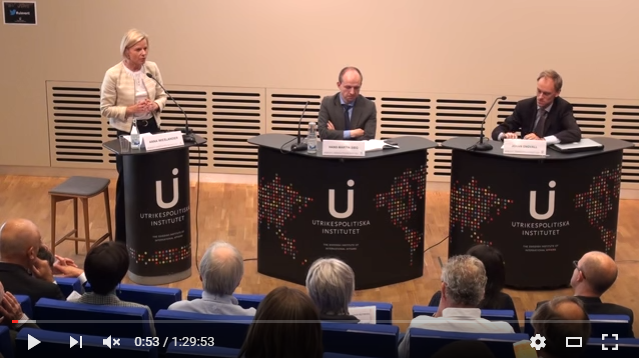 Moldova: Trapped between EU and Russia?

The Swedish Institute of International Affairs (UI) held a discussion on the current situation and recent developments in Moldova.

In 2014, Moldova signed an Association Agreement with the EU, and was increasingly referred to as the success story of the EU’s Eastern Partnership. At the same time, the country faces numerous challenges, including territorial conflict, dire living standards and geopolitical competition between the EU and Russia.

In addition, following a number of corruption scandals, the pro-European coalition government has rapidly lost the trust of the citizens and popular support for European integration is dwindling. In the past weeks, large-scale demonstrations in the capital Chisinau have demanded the resignation of the government and called for early parliamentary elections.

Against this backdrop: What does the future hold for Moldova? What are the implications of both EU and Russian involvement in the country? Could the tensions within the country even take a violent turn?
On October 2, 2015, the Swedish Institute of International Affairs (UI) arranged a discussion on the current situation and recent developments in Moldova.