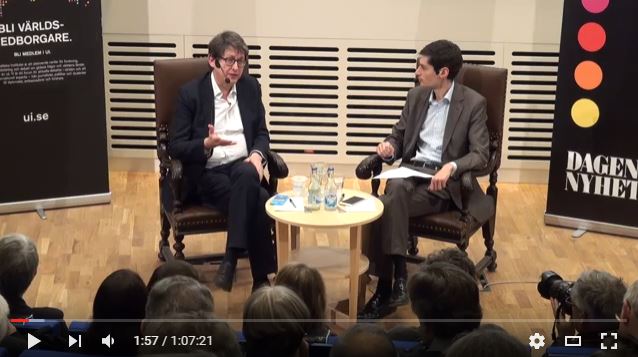 Democracy and the Right to Know - The Role of Global Media

Edward Snowden and Guardian editor-in-chief Alan Rusbridger have been jointly given the 2014 Right Livelihood Honorary Award. During Rusbridger’s editorship the paper has fought a number of high-profile battles over libel and press freedom, including cases involving Wikileaks and the so called "News of the World phone hacking scandal”. In 2013, Rusbridger played a leading role in publishing the surveillance revelations of Edward Snowden, persisting in this endeavour in the face of fierce government pressure.

Alan Rusbridger is awarded the Prize for his role in: "...building a global media organisation dedicated to responsible journalism in the public interest, undaunted by the challenges of exposing corporate and government malpractices”.

The discussion was moderated by Mats Karlsson, Director of UI.