Analysis. Since the collapse of Soviet Union in 1991, Ukraine’s political leaders have worked to achieve independent status for the Kyiv Patriarchate in direct challenge to the geopolitical views and ambitions of the Moscow-based Russian Orthodox Church. In that conflict, Moscow is facing the possibility of geopolitical setback, writes UI Senior Fellow Igor Torbakov.

In the simmering conflict in eastern Ukraine, Russia maintains the upper hand. But when it comes to the future of the Orthodox Church in Ukraine, Moscow is facing the possibility of geopolitical setback.

Disagreements over the past are a major source of acrimony between the Moscow-based Russian Orthodox Church (ROC) and the breakaway Kyiv Patriarchate. The feuding predates the Russian-Ukrainian political conflict, which began in 2014 with the Russian occupation of Crimea, and continues to simmer in eastern Ukraine’s Donbas Region.

Since the Soviet collapse in 1991, Ukraine’s political leaders have assiduously worked to secure recognition of the Kyiv Patriarchate’s independence. The ROC establishment, meanwhile, has tried to thwart Kyiv’s efforts at every turn, motivated mainly by a desire to defend its claim to be spiritual guardian of the thousand-year-old Orthodox civilization that originated in “historical Rus’.”

Ukraine’s and Russia’s histories have been symbiotically linked since the dawn of eastern Slavdom. Both Ukraine and Russia trace their origins back to Kyivan (Kievan) Rus’, a loose confederation of early medieval eastern Slavic principalities. In recent decades, each country has offered divergent interpretations of their shared history. 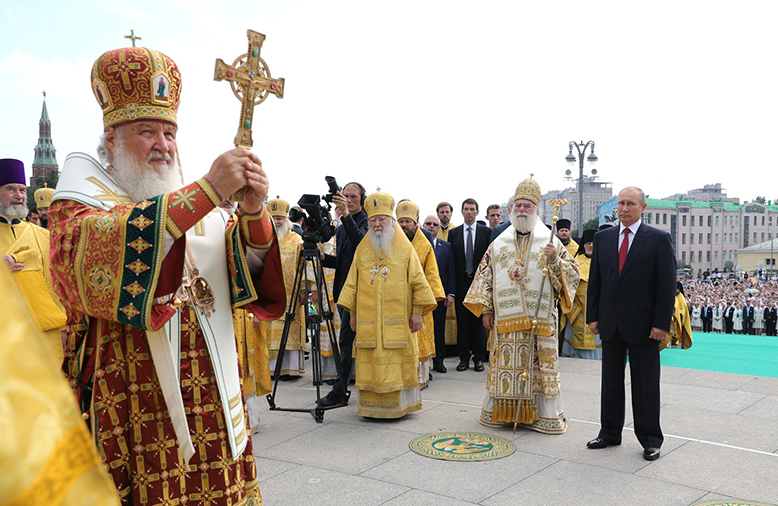 Two recent commemorative events illustrate the depth of this long-standing controversy, which has only intensified amid the conflict of the past few years. On July 28, liturgies and religious processions took place in both Moscow and Kyiv to mark the 1030th anniversary of the baptism of the Rus’ by Vladimir (Volodymyr) the Great, “a saint equal to the apostles.” While at the center of festivities in both countries was one and same historical figure, Moscow and Kyiv advanced divergent narratives concerning the entity that the ancient Slavic prince ruled over, and who precisely he baptized.

Speaking at a ceremony in the Kremlin’s Cathedral Square, Russian leader Vladimir Putin asserted that “the baptism [of Rus’ in 988] was the starting point for the development of Russian statehood.”

Ukraine’s President Petro Poroshenko scoffed at Putin’s claim. “Prince Volodymyr of Kyiv baptized not Russia, but Ukraine,” Poroshenko said on the eve of the anniversary in an interview with Serbian television. “Ukraine’s Mother Church – is [the Patriarchate of] Constantinople; historically, Ukraine acted as the mother for the Russian Orthodox Church. It was exactly like this, and not vice versa.”

These pronouncements echoed almost verbatim statements made by the two leaders three years before, when on July 28, 2015, the thousandth anniversary of Prince Vladimir’s death was celebrated in both countries. In his address on that occasion, Putin defined Vladimir as the prince who “laid the foundation for the formation of a united Russian nation,” having “baptized the people of Rus’ into Christianity.”

In contrast, the Ukrainian president at the time referred to Vladimir as the “Prince of Kyiv” who Christianized “Kyivan Rus’ – Ukraine.” 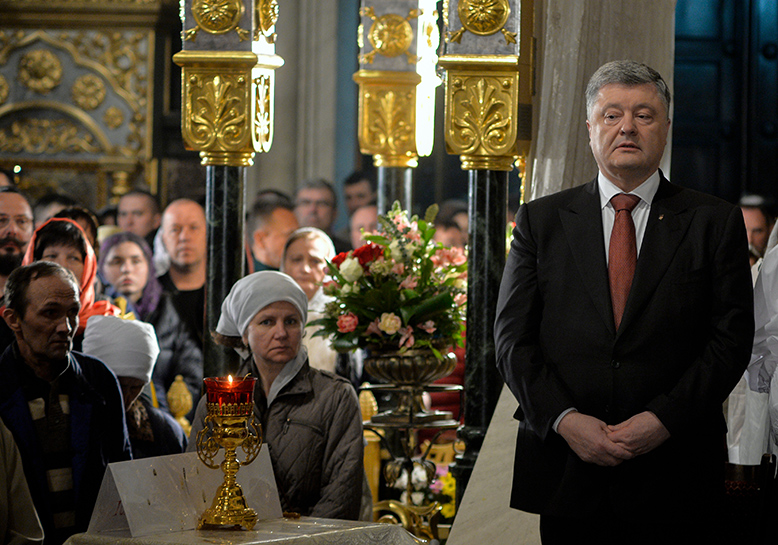 Kyiv’s celebrations of the two anniversaries suggest that the Ukrainian leadership is striving to uphold a historical narrative that dates the split in Ukraine’s and Russia’s historical paths back to the early Middle Ages.

Most professional historians see problems with both versions of history: Kyivan Rus’ was neither a Ukrainian nor a Russian state, and some scholars even doubt whether it was a full-fledged state at all. Ironically, the first scholar who bluntly stated that Kyivan Rus’ was neither Russia nor Ukraine, and that it was not a state but rather a loose federation of principalities, appears to be the 19th-century Russian historian and journalist Nikolai Polevoi.

An important geopolitical point is at stake in this Ukrainian-Russian tussle over history – namely, whether the ROC can continue playing the role of a “mega-church,” i.e. a quasi-imperial spiritual organization catering to the needs of Orthodox faithful within the expansive yet vaguely delimited boundaries of the “Russian World.”

There is no question that ROC leaders perceive themselves as presiding over precisely such a universal institution. In the aftermath of the collapse of the Russian Empire in 1917, followed by the Soviet breakup in 1991, the ROC can claim to be the sole surviving institution from the imperial era, uniting under its aegis thousands of Orthodox communities on its “canonical territory” – the lands that used to be parts of the sprawling bi-continental Tsarist empire. Patriarch Kirill likes to brag about the global reach of Russian Orthodoxy, “whose boundaries stretch from one end of the earth to the other,” and highlights its primacy in “the lands of the historical Rus’” – a concept that comprises at a minimum the territories of today’s Russia, Belarus, and Ukraine. 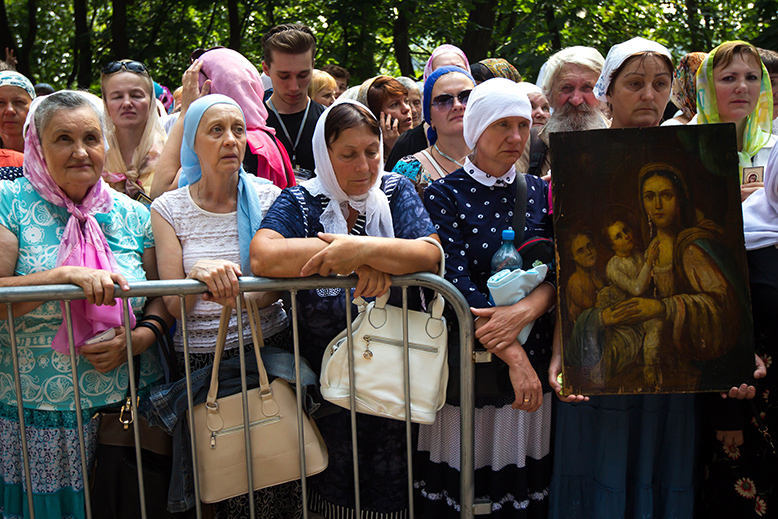 Kyiv’s efforts to achieve autocephalous (independent) status for its national church within Orthodoxy directly challenge the ROC’s geopolitical views and ambitions. The Ukrainian leadership is pursuing a two-pronged goal: to drastically curtail Moscow’s ideological influence in Ukraine; and to heal a schism within Ukrainian orthodoxy. Presently, Orthodox believers in Ukraine are divided into three polities – the Ukrainian Orthodox Church under the Moscow Patriarchate, the Ukrainian Orthodox Church under the Kyiv Patriarchate and the tiny Ukrainian Autocephalous Orthodox Church. At the moment, only the first one is considered canonical.

Ukraine’s chances of success hinge to a large extent on historical interpretation. Ukrainian leaders waste no opportunity to point out that it was a Kyivan prince who obtained the light of Christianity directly from Constantinople. They also assert that the transfer of the Kyivan Metropolitan see to Moscow’s jurisdiction in the end of the 17th century was marred by irregularities.

The Moscow Patriarchate dismisses this interpretation and continues to claim that the ROC is Kyiv’s Mother Church, and Ukraine its “canonical territory.” In Patriarch Kirill’s words, from the ROC’s perspective, “Kiev is not an ordinary city among others. … For our Church, Kiev is the same shrine that for all Orthodox Christians are Tsargrad (Constantinople) or Jerusalem.” 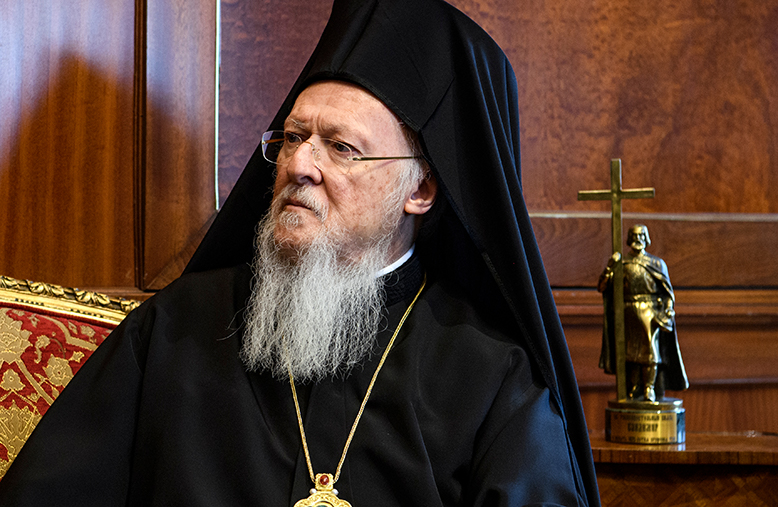 Ecumenical Patriarch Bartholomew of Constantinople (based in Istanbul) is a crucial figure in this politico-ecclesiastical intrigue, and he appears to be supportive of Ukrainian claims. In what seemed to be a response to a direct appeal by Poroshenko, who personally asked Bartholomew to grant the Ukrainian national church autocephaly during an audience in Istanbul this spring, the patriarch forcefully asserted Constantinople’s right to independently resolve the Ukrainian church issue.

Speaking on September 3 at the Synaxis of Hierarchs (Council of Bishops) of the Ecumenical Throne, Bartholomew said the possession of the Kyiv Metropolis by the Moscow Patriarchate contributed to “illegal elections of bishops and schisms, from which the pious Ukrainian people still suffer.” He added that he decided to intervene only when it became clear that the ROC, which is “responsible for the painful situation in Ukraine […] cannot resolve [the problem of schism] on its own.” Bartholomew then wasted no time announcing, on September 7, that he is sending his two exarchs (special representatives) to Kyiv. The emissaries of the Constantinople Patriarchate are said to be working on completing the process of granting autocephaly to the Ukrainian church.

Notably, this statement came on the heels of an August 31 meeting in Istanbul between Bartholomew and Patriarch Kirill, the ROC chief, at which the Russian church leader sought to dissuade Constantinople from supporting Kyiv’s quest for church independence. Needless to say, the ROC leaders are enraged. “The Patriarchate of Constantinople has now openly embarked on the path of war,” said Metropolitan Ilarion, the powerful head of the Moscow Patriarchate’s Department of External Church Relations. “And this war,” he added, “is not only against the Russian Church, not only against the Ukrainian Orthodox people. This is a war, in fact, against the unity of the whole world Orthodoxy.”

Ultimately, the achievement of autocephaly within Orthodoxy is a political process that has tended to run parallel to the collapse of empires and the establishment of independent nation-states. That’s how the autocephalous Greek, Rumanian, Bulgarian, and Albanian Orthodox churches emerged in the course of the Ottoman Empire's demise throughout the 19th and early 20th century. If that pattern holds, then, the Kyiv Patriarchate should gain official recognition in the not-so-distant future.

Igor Torbakov
Senior Fellow at Uppsala University and at the Swedish Institute of International Affairs in Stockholm, Sweden.

A version of this article was orginally published by Eurasianet.

Analysis. There is still no consensus in Russia on what kind of polity it is. In the struggle over how to define the Russian state, the Kremlin cherry-picks from nationalist tropes in pursuit of its policy goals, writes UI Senior Fellow Igor Torbakov.

Historical Revisionism in Russia and Turkey

Putin's Ambiguities over the Russian Revolutions

Analysis. President Putin would love to be seen as the heir to the power of the Romanov dynasty that was toppled in 1917. Yet the system that Putin presides over is more of an outgrowth of Soviet Communism than a link to tsarist Russia, writes Igor Torbakov at UI.

Russia: Putin as the Historian

Analysis. While Kremlin is lacking a clear plan for the country's future prosperity, Putin appears to be left with only one option: to focus on achieving historical legitimacy, writes Igor Torbakov, senior fellow at UI and Uppsala University.

Analysis. Despite the current rapprochement between Moscow and Ankara, and the philosophical affinity between neo-Eurasianism and neo-Ottomanism, these trends contain a potential for confrontation. Senior fellow Igor Torbakov at UI has more to tell.