Analysis. Similar to the Eurasianist nationalist project in Russia there is a strong neo-Ottoman trend in today’s Turkey, which provides a radically revised picture of Turkey's place and role in world affairs. But despite the current rapprochement between Moscow and Ankara, and the philosophical affinity between neo-Eurasianism and neo-Ottomanism, these trends contain a potential for confrontation. Igor Torbakov, Senior Fellow at the Center for Russian and Eurasian Studies at Uppsala University and Associate Fellow at the Swedish Institute of International Affairs, has more to tell.

As Evelyn Waugh once put it, “The creation of empires are often occasions of woe; their dissolution, always.” It is thus remarkable that commentators placed wars in Ukraine and in Syria within the context of imperial disintegration and precarious postimperial situation.

The leadership of Turkey – the heir of the formidable Ottoman Empire – perceives Syria, some analysts contended, in a manner very similar to how the leaders of Russia – a successor state to the Soviet Union – view Donbas. Indeed, the imperial past appears to be still influencing Turkey’s and Russia’s present. Both countries’ identities to a significant extent are shaped by their respective imperial legacies. While both countries’ elites insist that their strategy does not involve a restoration of empire, they are also quick to point out that Russia and Turkey are not “ordinary nation-states.”

They also both like to talk about their regional “primacy” or “privileged” interests in their strategic environment. Furthermore, politicians in both countries regard themselves as being not just politically but also morally responsible for what is transpiring in former imperial borderlands. The task of reintegrating their immediate neighborhoods appears high on the two countries’ agenda. The notions of the greater Russkii Mir (Russian World) or the “Eurasian Union” and the idea of the historical “Ottoman sphere” where Turkey is destined to play a role of bölge gücü (regional hegemon) seem to reflect the persistence of imperial imagery in both countries.

Over the last decade, during the era of intensive rapprochement between Moscow and Ankara, a number of analysts speculated that Russia and Turkey could form a strategic axis based on the shared vision of “Eurasia” – namely, that there was a close similarity between Moscow’s and Ankara’s strategic outlooks: Russian (neo)Eurasianism and Turkey’s (Kemalist) Eurasianism. Yet the outlook that defines Ankara’s understanding of Turkish national interest is not so much a permutation of “Eurasianist” ideas as its home-grown postimperial (and post-Kemalist) strategic vision – neo-Ottomanism. Despite their philosophical affinity, neo-Eurasianism and neo-Ottomanism contain significant potential for confrontation.

Scholars have long been intrigued by the problem of similarities and dissimilarities between Russia’s and Turkey’s historical development, in particular the two countries’ nation-building processes that started evolving in the “era of empires” and continued throughout the 20th century. Interestingly, both Russia’s liberal and ethnonationalist commentators tend to emphasize dissimilarities between the two countries’ historical trajectories. They cast the post-Ottoman Republic of Turkey as Russia’s antipode by emphasizing a resolute repudiation of empire by Kemalist elites during the early years of the Republican era and the reconstitution of Turkeyas a nation-state that sought to uproot supra-national religious self-understanding and impose secular and (ethno)national Turkish identity. In fact, a stronger argument can be made in support of imperial continuities in Turkey’s political imagination. Historically, all Turkish nationalist projects emerged as a response to a question of “how to save the empire.”

Since the early 1900s, Turkish political imaginary has had two dimensions: a supra-national and religious (“Ottoman”) and an ethno-religious “Turkish” one. Recent studies by Turkish and international scholars have demonstrated the persistence of supra-national imaginations in the construction of “Turkishness” over the last 100 years, encompassing the three crucial periods of 20th-century Turkish history:

1) the twilight years of the Ottoman era

3) the period of multiparty democracy after 1950.

The Ottoman Empire collapsed following the Ottomans’ defeat in World War I, and Western powers were perceived by those who would soon start calling themselves “Turks” as being directly responsible for this sorry outcome. Adding insult to injury, the allied forces occupied the imperial capital of the Ottoman sultans – Constantinople/Istanbul. In the 20th century, “Russia” (in its two historic incarnations of the Russian Empire and the Soviet Union) has experienced a similar geopolitical and national catastrophe twice – in 1917 and in 1991. In both instances the imperial polity disintegrated, resulting in the fragmentation of the previously united geopolitical space and in the deep crisis of identity.

The imperial collapse and postimperial anxieties constituted the political and psychological contexts within which a bold attempt at the thorough reinterpretation of Russia’s national and international identity was undertaken. Following political upheavals triggered by the 1917 Revolution and the breakup of the Romanov empire, a group of Russian thinkers (who chose to characterize themselves as “Eurasianists”) advanced a new vision of “postimperial” Russia as a special world unto itself – neither European nor Asian but “Eurasian” – that, without being a formal empire, would still preserve the territorial unity of “historic Russia.”

This unity, the Eurasianists contended, was an organic one as it was based on the solid foundation of multiple bonds forged by numerous ethnic and religious groups residing in “Russia-Eurasia” in the course of their common history. In other words, Eurasia’s geopolitical unity and social cohesion are indestructible as they embody the “symposium of brotherly peoples.” Significantly, in the wake of the 1991 Soviet implosion, post-Soviet Russia (as well as other ex-Soviet republics) saw the revival of Eurasianist ideas as the disparate groups of neo-Eurasianists sought to make sense of the new postimperial situation – one that bore strong structural resemblance to the conditions produced by the “Russian catastrophe” of the late 1910s.

But what about post-Ottoman Turkey? Given the deep trauma left by military defeat and the dismemberment of the empire by victorious “Westerners,” and given the persistence of imperial imagery and a kind of “Ottoman nostalgia” that started increasingly making itself felt since at least the 1940s, an important question will be in order.

The query can be formulated as follows: Has there been among various strands of Turkish nationalism a school of thought that would be somewhat akin to Russian Eurasianism – i.e. the one that would be viciously anti-Western, ground its historical/civilizational vision in religion, uphold an idea of cultural relativism, provide a critique of nation-state, and put forward the recreation of Pax Ottomana as its strategic objective?

There is a significant body of literature on the uses of “Eurasia” in Turkish geopolitical discourse as well as on Turkish Eurasianism and the latter’s links with its Russian counterpart. In most works, Turkish Eurasianism (Avrasyacilik) is presented as a left-leaning Kemalist ideology and anti-Western and pro-Russian geopolitical discourse that emerged in the 1990s and was a manifestation of Turkey’s international identity crisis in the post-Cold War era. Although the Turkish proponents of this geopolitical vision did self-identify as “Eurasianists,” one would not find a great deal in terms of serious Eurasianist content in their ideological and geopolitical constructions. On closer inspection, the only thing that appears to link their theories to classical (or neo-)Eurasianism is a kind of “counter-hegemonic vision” that is advanced as an alternative to Western- (US-) led globalization project.

Yet in Turkey there is a school of thought whose philosophical foundations and geopolitical aspirations closely resemble a set of ideas elaborated by various strands of Russian Eurasianism. It is the so called neo-Ottomanism – a concept now associated largely with theoretical musings of Turkey’s former prime-minister Ahmet Davutoğlu . Not unlike Russian Eurasianism, neo-Ottomanism is an ambitious new nationalist project: it boldly rethinks the parameters of Turkish nation and then provides a radically revised picture of its place and role in world affairs.

Like Russian Eurasianism, the neo-Ottomanist worldview, too, is pervaded by a sense of loss, “and it is the desire to retrieve what has been lost that motivates” Davutoğlu and other neo-Ottomanist thinkers. Eurasianists of course bemoaned the loss of “historic Russia” whose restoration by the Bolsheviks under the guise of the Soviet Union they warmly welcomed as the realization of the “natural historical process.” Needless to say, neo-Eurasianists consider the Soviet breakup as a completely “unnatural” development and are hell-bent on righting this wrong. For their part, neo-Ottomanists deplore the loss of a complex and culturally diverse Ottoman society as well as of the integrity of the Ottomans’ “historic” territory.

Three key notions play a fundamental role in neo-Ottomanist political imagination: the Ottoman historic legacy, the Sunni-Muslim identity, and the Ottoman (geographical) sphere/region. Imperial heritage and the geopolitical outreach it provides prompt a reformulation of Turkey’s national interest. The ultimate mission of the country’s leadership is to make Turkey a “great nation” – possibly a Great Power like the Ottoman Empire had been in its golden age. Yet national interest defined in this manner dictates a radically different international conduct. It would seem that, similar to the ambitions harbored by Russian ruling elites, neo-Ottomanists hold that Turkey’sprimacy in its strategic neighborhood should take the form of a new Turkish-led Pax Ottomana – a kind of “Ottoman Union.”

A desire to restore a Pax Ottomana is not just about establishing Turkey’sregional hegemony. Davutoğlu ’sand other neo-Ottomanists’ political imagination is grounded in idiosyncratic interpretation of Ottoman history. The imperial period is cast as an era of harmony and unity when the empire’s diverse population flourished under the sultans’ wise guidance, and the pernicious Western ideas of ethnonationalism and secularism had not yet produced cleavages in Ottoman complex social fabric.

Russian Eurasianism has sought to rethink “Russia” in such a way so that the imperial unity, which was shattered twice in the course of the 20th century, can be restored. In Eurasianism’s political imagination, contemporary Russian Federation is cast as “incomplete Russia,” whereas “genuine Russia” is “historic Russia” – that is Russia-Eurasia whose contours coincide with those of the Russian Empire and the Soviet Union. Russia-Eurasia is construed as an organic geographical, historical, cultural, and anthropological whole. Its collapse is considered to have been an unmitigated disaster for its diverse peoples, and the situation can be at least partially remedied by restoring this organic unity in the form of the Russia-led Eurasian Union.

Neo-Ottomanist construction of Turkey-centered Pax Ottomana appears to be the closest thing to Eurasianism in the Turkish context. For the ideologues of the ruling Justice and Development Party, a country with rich imperial heritage – such as Turkey – possessing significant historical and geographical depth, has a direct historical responsibility to pursue pro-active policy in its historically determined “geopolitical basin” with the ultimate objective of integrating this “Ottoman sphere.” 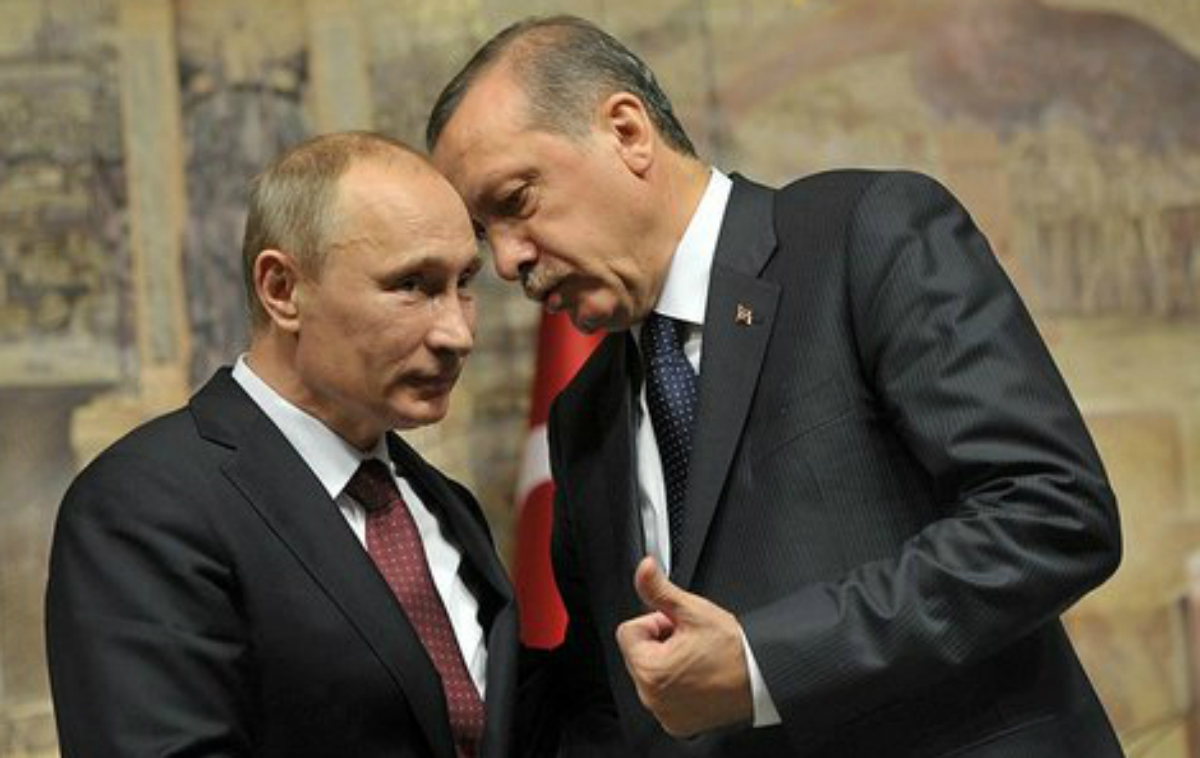 The bottom line here is this. Despite their philosophical affinity, neo-Eurasianism and neo-Ottomanism contain significant potential for confrontation. The fact that the top Russian leadership is less ideologically driven by Eurasianism than Turkey’s rulers are by Ottomanism does not matter much. The Kremlin is eager to instrumentalize Eurasianist tropes and geopolitical imagination when it deems it is expedient, while President Putin appears to firmly believe that both the Russian Empire and the Soviet Union were historical incarnations of “greater Russia.” What does matter is that the two imperial-nationalist and geopolitical visions informed by Eurasianist and Ottomanist ideas respectively, seek to integrate former imperial debris in the territories that constitute overlapping – and historically contested – neighborhoods of the two erstwhile empires.

English version: Winter of Gulenists Became Spring of Other Islamists

Ingmar Karlsson: Baklängens in i framtiden