Analysis. The outcome of the successful summit between the two Korean leaders depends largely on how North Korea’s Kim Jong-Un’s upcoming meeting with the US president Donald Trump goes. As with anything involving Trump, this is difficult to predict, writes UI fellow Ulv Hanssen. Success would mean tremendous success, and failure would mean tremendous failure. There is little chance of anything in between. And in a worst-case scenario it will bring us to the brink of war.

How the tide has turned! One year ago I wrote a piece for Utrikesmagasinet where I warned of the dangers of war between the US and North Korea – a prospect that did not seem unrealistic at the time. Since the beginning of 2018, however, the international community’s fear of war has gradually been replaced with hopes of peace. As if a switch had been turned on, this year has seen North Korea apparently abandoning its notoriously hostile rhetoric and adopting a commitment to rapprochement and – dare I say it? – denuclearization. This mood culminated with the successful inter-Korean summit on April 27.

The world was mesmerized by the historic images of the two Korean leaders smilingly shaking hands across the North-South border in Panmunjom and Kim Jong-un’s crossing into South Korean territory. The main outcome of the summit was the Panmunjom Declaration, which promised nothing less than the complete denuclearization of the Korean Peninsula.

It all sounded almost too good to be true. And it might very well be just that.

Let us first look at what the Panmunjom Declaration actually contains. Most importantly the Declaration states that both sides are committed to the ‘denuclearization of the Korean Peninsula’. This is a complete about-face from Pyongyang’s consistent position that the nuclear program is non-negotiable. 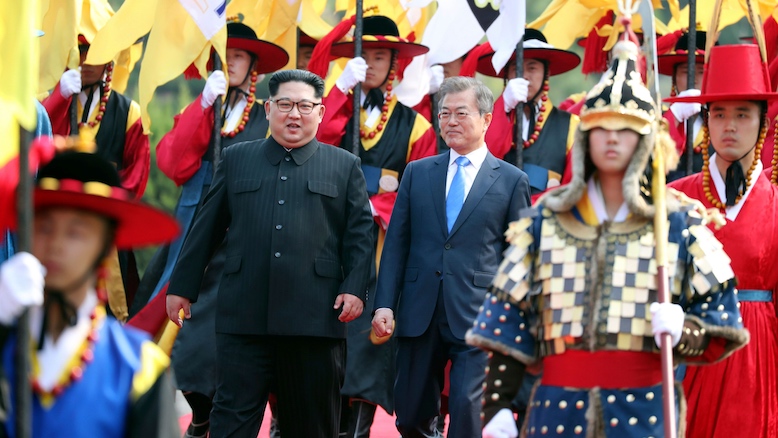 The Declaration explains denuclearization as a part of the process to establish a ‘permanent and solid peace regime’ on the Korean Peninsula. In addition to denuclearization, the peace regime will be achieved through a promise by both sides to refrain from using force against each other, mutual disarmament of conventional weapons, and an end to the Korean War (1950-53) through a formal peace treaty. Since the war was concluded only with an armistice in 1953, the state of war still continues.

Both sides also pledged to increase dialogue and negotiations and to ‘encourage more active cooperation, exchanges, visits and contacts at all levels’. South Korean President Moon Jae-In vowed to visit Pyongyang this fall. On the economic cooperation side, North and South Korea pledged to modernize the railroads that connect the two countries.

This is all well and good, but is it realistic?

North and South Korea cannot achieve the two most significant parts of the Panmunjom Declaration – denuclearization and ending the Korean War – by themselves. The UN sanctions regime also precludes the two countries from freely engaging in economic cooperation with each other. Despite the Declaration’s nice-sounding insistence that the two Koreas must ‘determin[e] the destiny of the Korean nation on their own accord’, the issues it raises must necessarily be coordinated with other countries, particularly the US. There are therefore limits to what the two Koreas can do on their own. 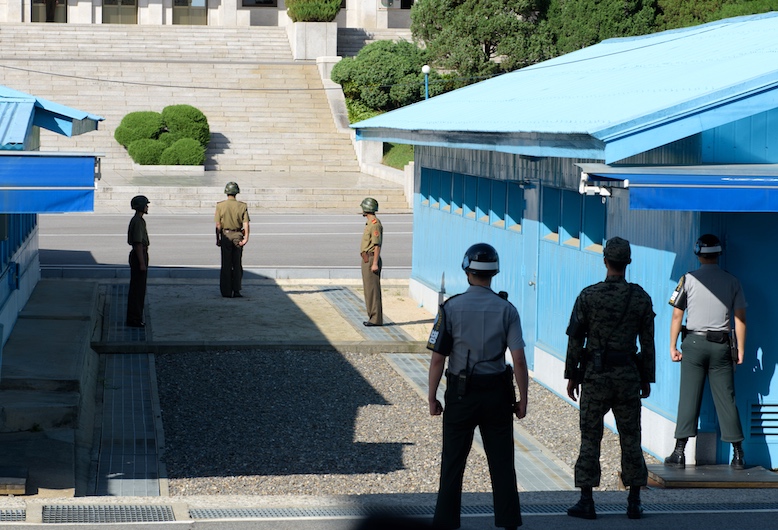 Guards looking across the border in the demilitarized zone (DMZ) between North Korea and South Korea. Photo: Peter Kollar/Shutterstock

Ending the Korean War is more complicated than it sounds. It was not a simply a battle between North and South Korea, it also involved a number of other actors. Moreover, there are a number of legal technicalities that might complicate a peace process. First of all, South Korea never signed the armistice in 1953 because then-President Syngman Rhee wanted to continue fighting. Secondly, North Korea has withdrawn from the armistice on several occasions. Third, the US was officially fighting under the UN Command, so a peace treaty would have to include a large number of relevant UN countries. Fourth, the Chinese signatory to the armistice did not represent the People’s Republic of China per se, but rather the Chinese People’s Volunteer Army, which no longer exists.

These technicalities present a legal conundrum, but since no side has a strong interest in the continuation of the state of war, it should be possible for the relevant parties to find a political solution. Nonetheless, the complexity of the issue rules out any simple bilateral agreement between North and South Korea. 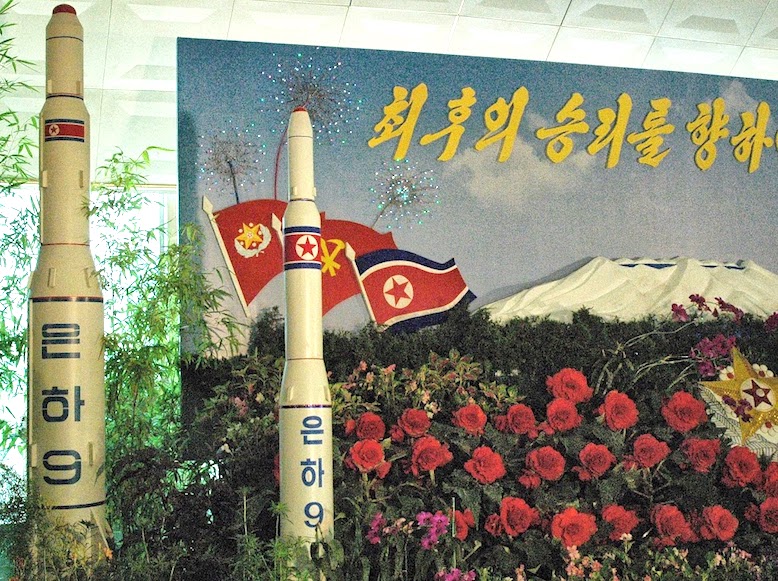 A model of the Unha-9 missile on display at a floral exhibition in Pyongyang. Photo: Steve Herman/VOA News/Creative Commons

Since North Korea is the only Korean state in possession of nuclear weapons one would logically think that this phrase refers to the abolition of North Korean nuclear weapons. However, the devil is in the details. It remains to be seen how North Korea defines ‘denuclearization of the Korean peninsula’. We should not be surprised if Pyongyang rehashes old claims that North Korean denuclearization is contingent on a dismantlement of the American nuclear umbrella over South Korea or the withdrawal of US Forces from South Korea. Such claims would be unacceptable to the US, and if made, they would undoubtedly derail the negotiation process. In the opening phase the onus is on North Korea to show, by concrete action, not just words, that it is serious about denuclearization.

Finally, it is also beyond the two Koreas to hammer out any concrete plans for economic cooperation without gaining the approval of the international community. Such plans may have been possible during the years of Seoul’s North Korea-friendly Sunshine Policy (1998-2008) before the international sanctions regime against Pyongyang was properly institutionalized. However, today almost all potential avenues for economic cooperation are blocked by a nearly all-encompassing sanctions regime (tourism is one notable exception).

The railway modernization project mentioned in the Declaration would probably violate UN Security Council Resolution 2375 (September 2017) which prohibits ‘all joint ventures or cooperative entities … with DPRK entities or individuals’. So, in order to realize any aspirations on inter-Korean trade and economic cooperation, South Korea would have to convince the international community to lift the UN sanctions. This would of course be impossible without concrete progress on the denuclearization issue. 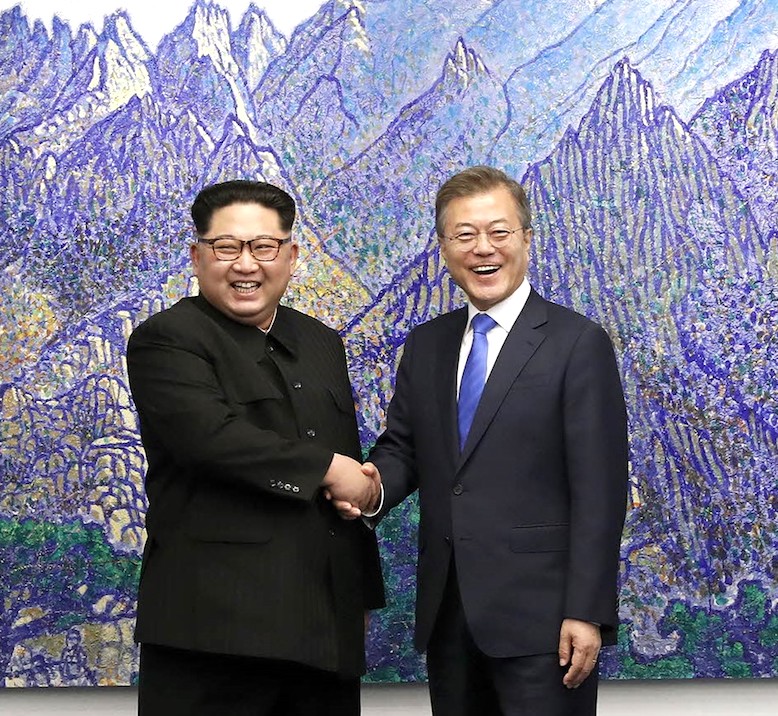 In sum, while the South Korean Government naturally lauds the Panmunjom Declaration as an historic achievement and a major breakthrough, we should not expect any progress on the Declaration’s most significant points until other relevant states, most importantly the US, have given the Declaration their seal of approval. Needless to say, this hinges on the outcome of the upcoming Trump-Kim summit.

How will the Trump-Kim summit play out?

As with anything involving Trump, this is difficult to predict. Trump’s comments about Kim Jong-Un have ranged from praising him as a ‘smart cookie’ and ‘very honorable’ to deriding him as a ‘madman’ and, famously, ‘Little Rocket Man’. At times he has expressed a desire for diplomacy, but more often he has shown a worrisome inclination towards military threats. One thing he has been consistent on is his insistence that the Trump Administration will not be tricked like past administrations.

Trump has also said that if he senses that North Korea is not sincere about denuclearization he will not hesitate to walk away from the negotiations. Future success therefore depends on whether North Korea is serious about giving up its nuclear program. That is a cause for concern given North Korea’s long track record of cheating.

If Kim, in the upcoming talks with Trump, attaches unexpected conditions to North Korean denuclearization, the talks may break down before they get off the ground. This really is the worst-case scenario because it would hurl us back to where we were in 2017, that is, to the brink of war.

Frighteningly, Trump’s Cabinet anno May 2018 is arguably even more hawkish than was the case in 2017, as Trump has added Mike Pompeo as Secretary of State and John Bolton as his National Security Advisor. Both men are known for their averseness towards negotiations. While Pompeo recently seems to have discovered an uncharacteristic appreciation of diplomacy and even travelled to Pyongyang to meet Kim Jong-un, Bolton is as hawkish as ever.

In fact, on the same day as he took over as National Security Advisor on March 9, Bolton appeared in a Fox News interview where he insisted that the North Koreans were lying about denuclearization (actual quote: ‘How do you know that the North Korean regime is lying? Answer: Their lips are moving’). Bolton argued that the only good reason for Trump to meet with Kim is to establish once and for all that North Korea is bluffing and thus shorten the time ‘that we are gonna waste in negotiations that will never produce the result we want’. With this kind of negotiation-averse Cabinet, there is good reason to fear that if US-North Korean negotiations were to break down, tensions will not only return, but even exceed anything we witnessed last year. 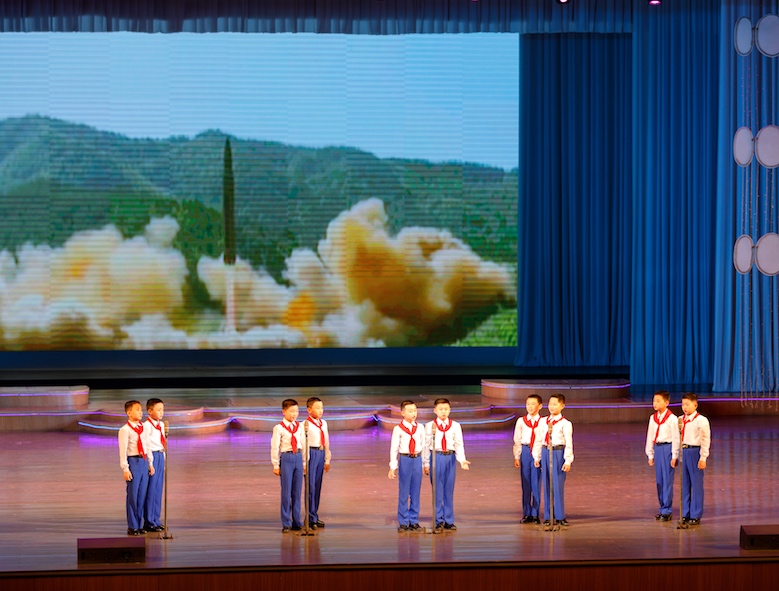 North Korean pioneers perform on the stage of the Palace of Pioneers. Photo: Shutterstock

One must wonder, however, why Kim Jong-Un would be willing to give up his nuclear weapons now. The regular military threats by the Trump Administration would suggest that the need for a nuclear deterrent is stronger than ever. Moreover, we should not forget that the Trump Administration is doing its best to sabotage the Iran nuclear agreement. If a similar agreement were to be reached with North Korea it would exceed most North Korea observers’ expectations, and it should rightfully be lauded as a landmark achievement.

However, why would North Korea – a state with serious trust issues – trust an American government that asks for a nuclear deal while simultaneously trying to rip up a similar one without any apparent reason?

This would take us back to an even more dangerous situation than was the case last year. If negotiations fail, the more bellicose members of Trump’s administration will be able to make the argument that both sanctions and negotiations have failed and that the time has come to think about military solutions.

If, however, Kim truly is committed to denuclearization and Trump manages to persuade him that North Korea will be secure without them, we might be heading for true peace on the Korean Peninsula.