Analysis. Russia and Iran are both under Western sanctions, and every prolonged sanction period seems to strengthen the relation between them. Recent meetings between the countries have attracted a substantial amount of attention, mainly because of the Kremlin’s defiance of US sanction threats against countries who trade with Iran. UI´s intern Kiana Islamian gives an insight into the Russia-Iran relationship.

Geographically, Iran and Russia consider themselves neighbors since Iran shares its northern borders with the former Soviet (and Persian) countries Azerbaijan, Armenia and Turkmenistan. Balance of power in the region has been on the countries’ agendas for centuries. The first diplomatic contacts between Russia and Iran were established in the 16th century, with Russia acting as an intermediary in the trade between Persia and Britain. The power was relatively balanced between the Russian and Persian empires for the next two centuries. Thereafter, until the Pahlavi era [1925-1979], their history is a mixture of Russian domination over Iran, balance again and wars lost by Iran.

Ever since the breakup of the Soviet Union, the bond between Russia and Iran has been dependent on their current relationship with the United States. As noted by Dimitri Trenin at the Carnegie Moscow Center, “When pressed hard by the United States, Russia would often make concessions at the expense of their Iranian connection.” This, however, has changed somewhat following the imposition of sanctions against both Russia and Iran. Improving the countries’ respective ties with the US proved more difficult than forging closer ties between Moscow and Tehran.

Since March 2014, the EU, the United States, and several other Western countries have progressively imposed restrictive measures against Russia, in response to Russia’s annexation of Crimea and the deliberate destabilization of Ukraine. Russia’s response has been to impose its own sanctions against Western countries, banning the import of specific food products.

In Iran’s case, the reasons for the sanctions against the country are related to its nuclear program and violations against human rights. The restrictive measures responding to Iran’s violations against human rights have been standing since 2011, whilst the P5+1 (China, France, Germany, the United Kingdom, the United States, and Russia) lifted all nuclear-related economic and financial sanctions (with some restrictions remaining in force) against Iran on January 16, 2016, in accordance with the Joint Comprehensive Plan of Action, JCPOA, or the “Iran nuclear deal”.

In November 2018, the Trump administration fully re-imposed the Iran sanctions that had been lifted under the JCPOA. The government of the United States declares them as the toughest U.S. sanctions ever imposed against the country. The return of the sanctions was not supported by any other signatory of the JCPOA, and the EU has argued that the agreement should remain in place. 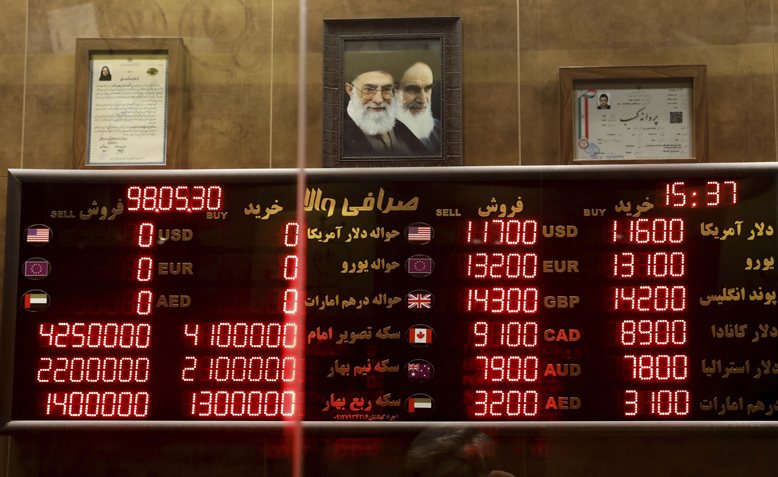 Rates and prices for currencies and gold coins are displayed at an exchange bureau in Tehran. Photo: Ebrahim Noroozi/AP

For Iran, it is obvious that the sanctions have affected the economy. Reuters  reported in April this year that according to a U.S. official, “the U.S. sanctions against Iran have denied its government more than US$ 10 billion in oil revenue.” Further, the Iranian currency has lost more than 60 percent of its value which has disrupted Iran’s foreign trade and escalated annual inflation. The country's inflation could reach up to 40 percent this year.

There are a lot of reasons for Russia and Iran to strengthen their trade, besides wanting to poke West in the eyes. The relationship with Iran gives Russia a position in the Middle East and the possibility to expand its exports. Iran provides a large market based on the size of the population and has a government that due to the sanctions is more than interested in what Russia has to offer.

According to the Iranian energy minister Reza Ardakanian, the deal with the EAEU allows for zero-tariff exports on 70 products and lower duty on 503 other products. The EAEU will export meat products, sweets, cosmetics, machinery and technical equipment to Iran, and Iran will export vegetables, fruits, building materials and carpets to the EAEU. Spokesman of Iran’s Guardian Council Abbas Ali Kadkhodaei tweeted, “This agreement will be a substantial help to (Iran’s) economic development and to defeat sanctions using diplomacy and the potential of international and regional organizations.” 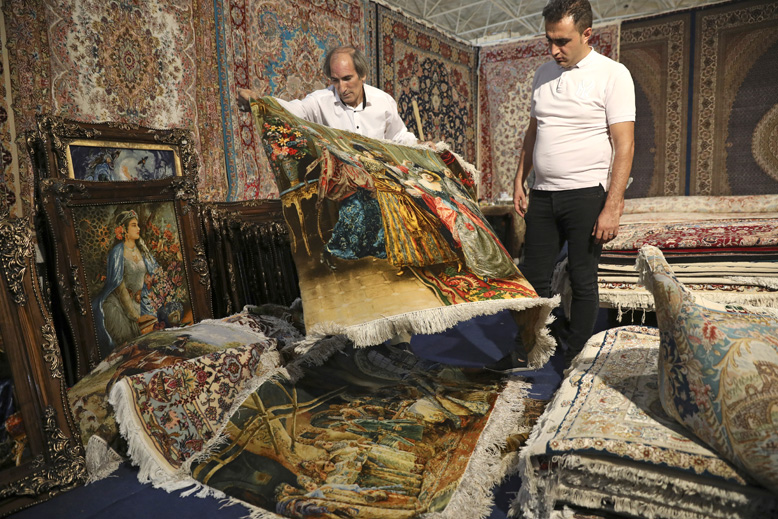 The countries’ leaders are expressing great optimism about the new deal. President Hassan Rouhani said in a meeting with Armenian President Armen Sarkissian, on October 1 in Yerevan, “Iran’s participation in Eurasian Union’s economic relations can be a very good opportunity for deepening bilateral economic cooperation, as well as at the regional level.”

After the Supreme Eurasian Economic Council meeting, the reason for Rouhani’s trip to Yerevan, the Russian and Iranian presidents met. Vladimir Putin hailed Iran’s joining the EAEU saying, “I am pleased to say that we are working together on Iran’s accession to the Eurasian Economic Union. I am confident that this work will benefit our countries.” Rouhani agreed and said that he would like to note that “during the 500 years of our relations we have reached unprecedented sincerity.”

Further, Russia and Iran have several ongoing and finished energy projects. The first Russian-built nuclear power unit was installed in 2011 in Bushehr. In 2014, Russia signed a deal with Iran to build up to eight more nuclear reactors in the country. According to an agreement signed in July 2016, Russia is going to provide a loan to fund 85 percent of the construction costs of a 1,400-megawatt thermal power plant in Sirik.

Iran’s hydrocarbon industry and energy infrastructure has fallen behind during the sanction years. It has created an opportunity for cooperation between the countries since Russia has the technology and expertise that Iran needs within this sector and is willing to share it despite the possibility of rivalry in the long term. After the lifting of sanctions against Iran in 2016, Russia and Iran stepped up talks on Russian oil and gas companies developing fields in Iran. But after Trump’s sanction threats, several Russian oil and gas companies dropped their projects in Iran and withdrew from the country. 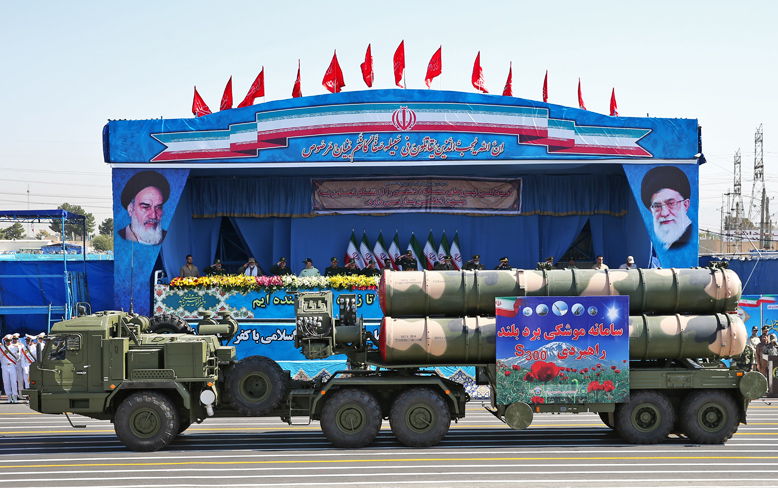 When it comes to arms, Russia has been a significant supplier to Iran but has not always delivered as much as requested. Iran has been under a UN arms embargo since 2010 which is scheduled to last until 2020. Before the imposition of the embargo, Russia sold the missile S-300 to Iran but suspended the sale of the system due to the embargo in 2010 until 2016, after the JCPOA. The postponement annoyed the Iranians, and the perception was fueled that no foreign powers could be trusted regarding resisting Western pressure to isolate Iran.

The defense cooperation between Russia and Iran goes beyond arms sales, with joint military drills and on-the-ground coordination. It is a matter of security for Russia to have Iran as an ally since Iran is one of the main actors in the Middle East, a stable power in an otherwise volatile area, and has a wide influence in the region. Iran has been a valuable regional ally for Russia in Syria, Afghanistan and the southern parts of the former Soviet Union; areas where the countries have mutual interests. Maintaining a relationship with Iran has further supported Moscow’s strategy of balancing Russia’s relations also with Saudi Arabia and Israel, two traditional Iranian enemies in the Middle East.

In recent years, military cooperation between Iran and Russia has deepened as a consequence of the Syrian civil war, where the countries have been the most important allies of Bashar al-Assad. But the military cooperation has faced political setbacks. In August 2016, it was revealed by the Russians that Iran had allowed Russia to use its airbase to strike targets in Syria, even though the countries had agreed to keep the matter a secret. Iran forbids by law any establishing of foreign military bases on their territory.

The act faced some nationalist backlash in Iran and the Iranian defense minister had to make clear that “under no circumstances, will we ever provide Russians with a military base. They have not come here to stay.” The writers of the book Triple-Axis: Iran's Relations with Russia and China refers to this airbase incident as an example of the complex nature of the Iran-Russia defense and security cooperation: Increased military cooperation against a backdrop of tensions.[1] 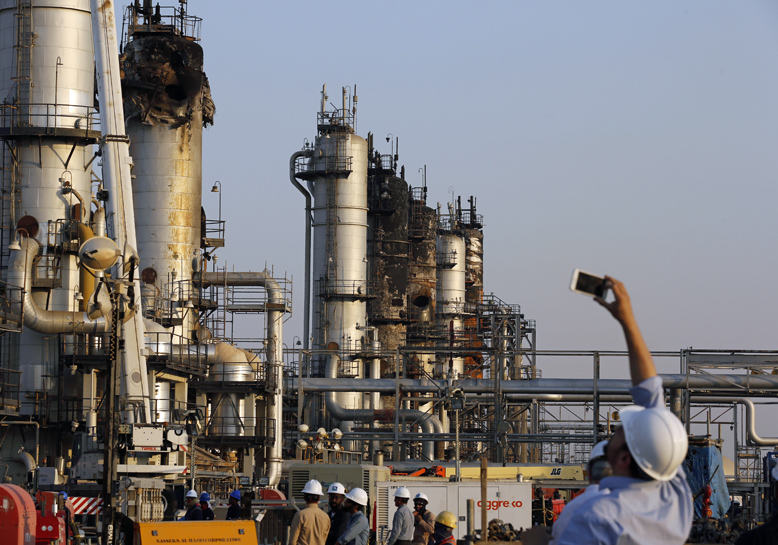 The Iran-Russia relationship has an obvious geostrategic rationale. After the drone attack on a US-allied Saudi Arabia’s oilfield on September 14, 2019, which Yemen's Iran-allied Houthi rebels have claimed responsibility for, Trump tweeted that the US is “locked and loaded”. Iran has denied the allegations. Russia, as one of the five permanent members of the UN Security Council with a veto right, is a powerful ally.

However, Russia would prefer it to not come to that point where it must pick a side in the Iran-Saudi conflict and give up its neutral position. Putin’s response to the incident was to deny that Iran was responsible for the attacks and shift focus to Saudi Arabia’s apparently deficient U.S. defense system. During a joint news conference in Ankara, on September 16, he remarked that all “the political leaders of Saudi Arabia have to do is take a wise decision, as Iran did by buying the S-300 missile system, and as President Erdoğan did when he bought Russia’s latest S-400 Triumph anti-aircraft system.” The comment was backed with laughter from Rouhani and the Iranian foreign minister.

Even though Russia and Iran are portraying the trade deal with the EAEU as a breakthrough for their trade and economy, it will not be enough to compensate for the lost trade with the EU and the US. The dilemma is structural: the main export of both Russia and Iran is crude petroleum, so the countries are natural competitors on the international oil market with few other high-value goods to offer for export. For Iran, the country’s main export to Russia is fruits and vegetables. Neither Iran nor Russia can use the EAEU, which has a collective GDP of around US$ 1.9 trillion (Russia included), to substitute for the EU, which has a GDP of around US$ 19.5 trillion

Nevertheless, Russia and Iran are set to forge stronger economic ties than ever before. But what is significant about their relationship is that it is built on interests rather than values. Therefore, it remains to be seen how strong this partnership will remain over time. The stronger the ties are created between Russia and Iran, the more challenging it will be for Western states to successfully isolate Iran.

Kiana Islamian
Intern at the Russia and Eurasia Programme at UI.