Analysis. The mass protests in Hong Kong are a nightmare for the leaders in Beijing. They undermine the narrative of a happy nation under Chinese Communist Party rule. To the rest of the world the protests are relevant as a test of whether China will uphold its legal obligations and whether the West will act to defend universal values, writes UI research fellow Tim Rühlig.

The year is 2019. China in its entirety is lacking civil liberty rights. Well, not entirely… One city down in the south holds on in defending the freedom it has. And life is not easy for China which tries to increase its control over the city…

This adaptation of the opening lines of all Asterix comics describes the situation in Hong Kong, China’s Special Administrative Region in the south of the country. Hundreds of thousands of people – estimations go up to 2 million protesters in a city of 7.5 million inhabitants – have taken to the streets protesting for the preservation of judicial independence and civil liberty rights. The ongoing protests have deep roots in the history of Hong Kong.

For more than a century, British colonial rule set Chinese and Hong Kongese apart. For China, this was a hurtful reminder of the days in the mid-19th century when the country was weak. Many citizens of Hong Kong saw themselves as Chinese and wanted to return to their motherland. When Hong Kong finally returned to China in 1997, however, the two political entities had very different experiences and characteristics. 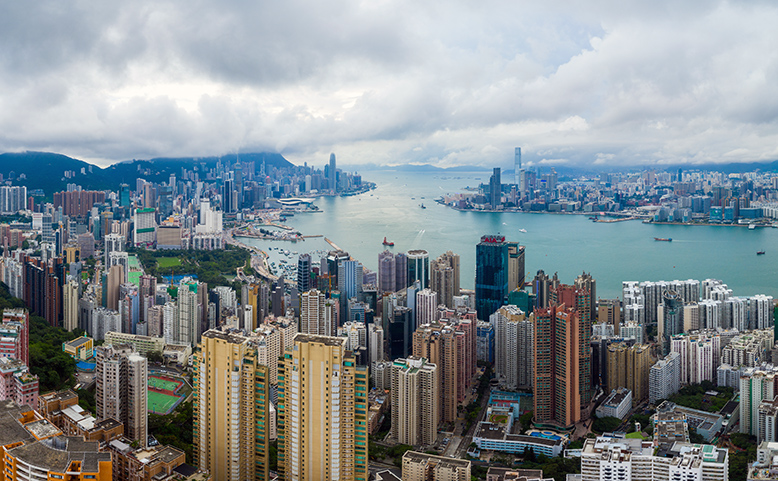 Even though Hong Kong was not a democracy its citizens were granted far more participatory rights than were the citizens of the rest of the country, which to this day is fully controlled by the Chinese Communist Party. Economically, Hong Kong had one of the most liberal capitalist systems in the world while China remained a state-permeated and highly protectionist economy. Maybe most importantly, Hong Kong possessed an independent judiciary based on the British Common Law system and the citizens enjoyed all major civil liberty rights. This stands in sharp contrast to China’s emphasis of economic human rights, restrictions of civil liberties and the lack of independent jurisprudence.

Upon the handover of Hong Kong from British to Chinese rule, the People’s Republic guaranteed the preservation of a “high degree of autonomy” for Hong Kong including distinct political, economic and judicial systems until the year 2047. This promise is enshrined in the “One Country, Two Systems” principle that became part of the Sino-British Joint Declaration, a binding bilateral treaty under international law registered with the United Nations.

Over the years, the “One Country, Two Systems” principle has become subject to fierce competition. Mass demonstrations shocked the rulers in Beijing for the first time in 2003, when 500,000 protesters hit the streets to protest national security legislation that many citizens feared would undermine the political and judicial freedom of Hong Kong. The bill was withdrawn and no attempt was made to reintroduce it to the legislative process again. Every year on 4 June, tens if not hundreds of thousands of people commemorate the anniversary of the 1989 protests in Beijing’s Tiananmen Square. In 2014, mainly young people occupied three neighborhoods of Hong Kong for 79 days demanding real democracy. It became famous as the Umbrella Movement. 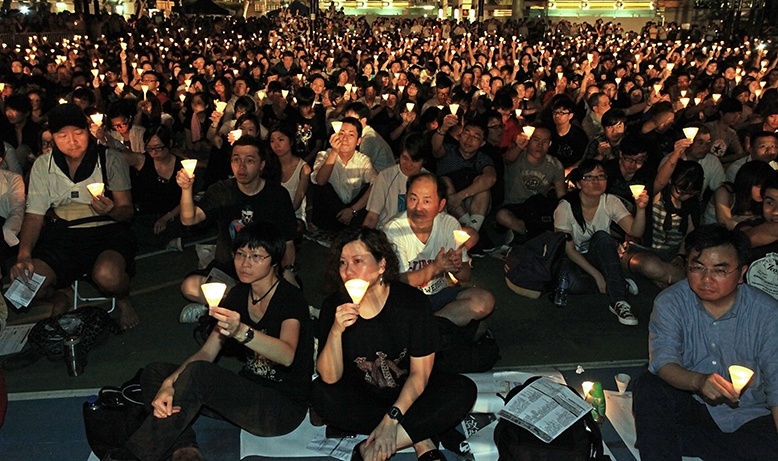 Tens of thousands of people in Hong Kong commemorate the anniversary of the 1989 protests in Beijing’s Tiananmen Square. Photo: Alex Brylov/Shutterstock

Now, starting on 9 June, Hong Kong experiences the largest protests in 30 years. Somewhere between 330,000 and 2 million people are marching to fight a controversial bill that would allow the extradition of criminals to Chinese courts. The initial argument for the bill was it would close a legal loophole that prevented authorities from extraditing a murder suspect. The government, a close ally of Beijing, assured nobody would be extradited for political reasons. Critics, however, fear that the bill would undermine Hong Kong freedoms and that the risk of an unfair trial in China would mute political opposition.

The protests in Hong Kong are widespread and include not only the traditional opposition against the tightening grip of Chinese control over the city, but also the judiciary and large parts of the economic elite which fears a loss of the good international reputation serving Hong Kong’s business interests.

After several days of mass protests, the head of the Hong Kong government, Chief Executive Carrie Lam, announced to the surprise of the protesters and the public that the bill will be suspended. However, this did not mute the protests. In the following days, even more demonstrators hit the streets demanding the complete withdrawal of the bill (just like with the national security law in 2003) and the resignation of Carrie Lam. In the current status of suspension, the Hong Kong government could retable the bill any time and vote upon it within 12 days only. 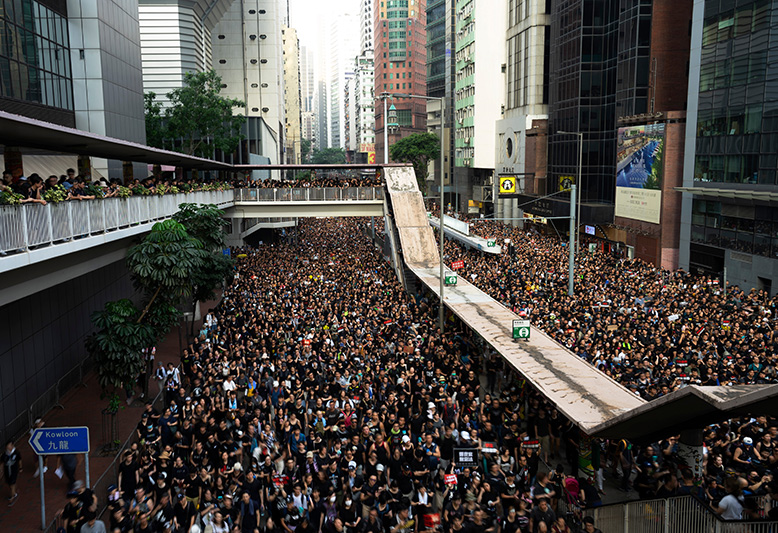 Even if the controversial extradition would be adopted at a later stage (which is rather unlikely) the Chinese leaders are in trouble. Already in 2014, the protests did not result in the demanded real democratization of Hong Kong. Many people were frustrated. Five years later, the Chinese rulers have to acknowledge that despite all the frustration, Hong Kong protests are well alive. Beijing’s strategy to wait out demonstrations has failed. On the contrary, some of the protesters, particularly young people, have been radicalized, claiming that “One Country, Two Systems” is disastrous and demanding independence. This is a nightmare for Beijing because the recovery of control over Hong Kong serves as a strong symbol for the Chinese Communist Party’s success to overcome the colonial past, placing China in the club of great powers again. The protests in Hong Kong undermine the nationalist narrative of a happy and grateful nation following the leadership of the Chinese Communist Party.

Another threat to the rulers in Beijing is the fact that Hong Kong is evidence that a different form of government, distinguished from the Chinese Communist Party’s one-party rule, is feasible on Chinese soil. It is this far-reaching implication that makes the question of Hong Kong highly relevant from an international standpoint. If Hong Kong was allowed to successfully develop a prosperous society based on civil liberty rights, democracy, a free market economy and an independent judiciary, Chinese citizens could one day demand the very same for the rest of the country. 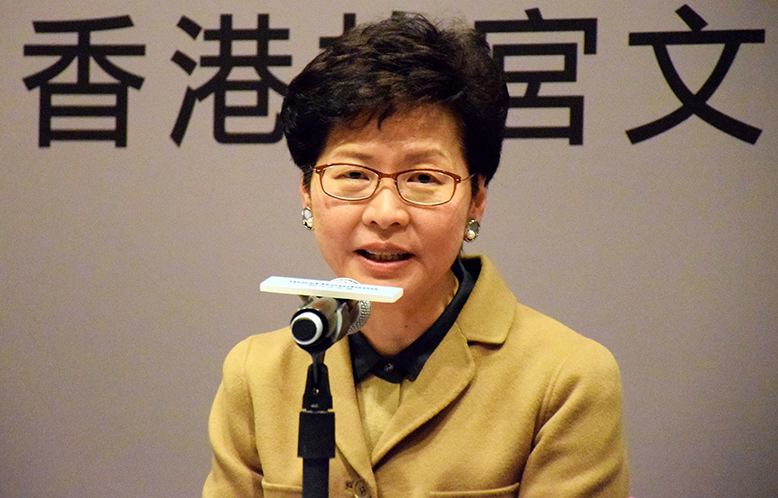 This leaves the Chinese rulers in an uncomfortable position. They are not interested in mass protests, nor can they allow Hong Kong to turn into a truly free society posing a threat by its mere existence as an alternative model on Chinese soil. There is indication that it was Beijing that decided the bill should be withdrawn and Hong Kong society appeased. Former Chief Executive CY Leung lost China’s backing for reelection after mishandling the protests in 2014. Carrie Lam is likely to “suffer” the same fate.

What is the West’s role?

At first glance, the issue of Hong Kong’s freedom appears to be a local phenomenon with little implications for the rest of the world. Accordingly, the public as well as the academic attention is limited. This perspective is misleading for at least three reasons:

Firstly, despite all contrary Chinese claims, Hong Kong’s freedoms are not merely a matter of domestic Chinese affairs but are a promise enshrined in international law. Insisting on it is equal to reminding China that it has to fulfill its international legal obligations. This is particularly significant for the United Kingdom as being the signatory of the Sino-British Joint Declaration.

Secondly, if successful, Hong Kong could become a template on how to handle (or not to handle) any potential reunification with Taiwan. Upon this background, the controversy in Hong Kong could even impact the ongoing presidential campaign in Taiwan and give a boost to the rather China-critical current President Tsai Ing-wen, who has come out in open support of the protests.

Thirdly, at times when democracy seems to be in retreat and the authoritarian governance principles of China receive gain attraction around the globe, the strong demand from Hong Kong people for universal values is an encouraging sign that deserves European support. 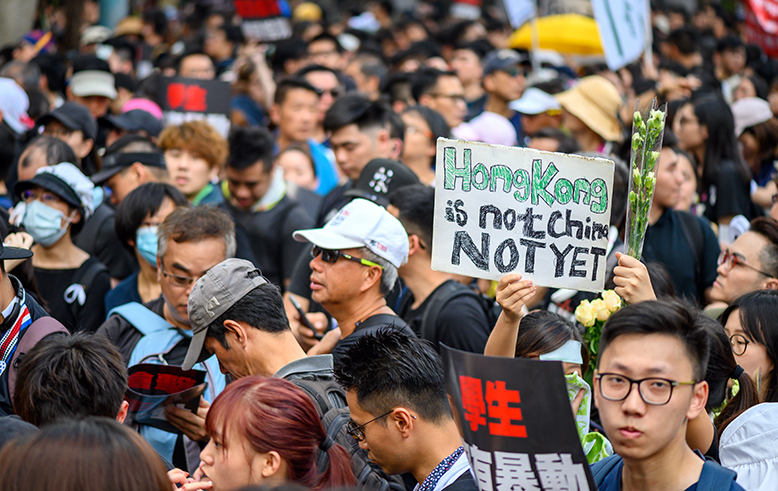 What can the West do about it? It is unrealistic that the EU and its member states could fundamentally (re-)shape China’s calculations. Hong Kong’s freedoms pose too much of an ideological threat to China for external actors to serve as “game changers”. Nonetheless, Europe and the United States are not completely powerless.

Most straightforward, Western countries could consider reviewing their export rules towards Hong Kong making sure that no crowd control equipment is exported to the city. Most recently, the Campaign Against Arms Trade has published a study claiming that European states, particularly the United Kingdom, continue to deliver materials to the Hong Kong police that is used to fight pro-democratic protesters.

More importantly, China and pro-Chinese elites in Hong Kong fear reputational damage and its economic consequences for the city. Accordingly, the German decision to grant asylum to two Hong Kong protesters earlier this year, expressing distrust in Hong Kong’s freedom, was clearly a blow to the city’s reputation. Other measures under consideration are the termination of the United States-Hong Kong Policy Act of 1992, which allows the different treatment – particularly in terms of trade – of Hong Kong compared to China. In addition, the 2017 initiative of Congressman Chris Smith and Senator Marco Rubio for a new Hong Kong Human Rights and Democracy Act could gain Congressional support.